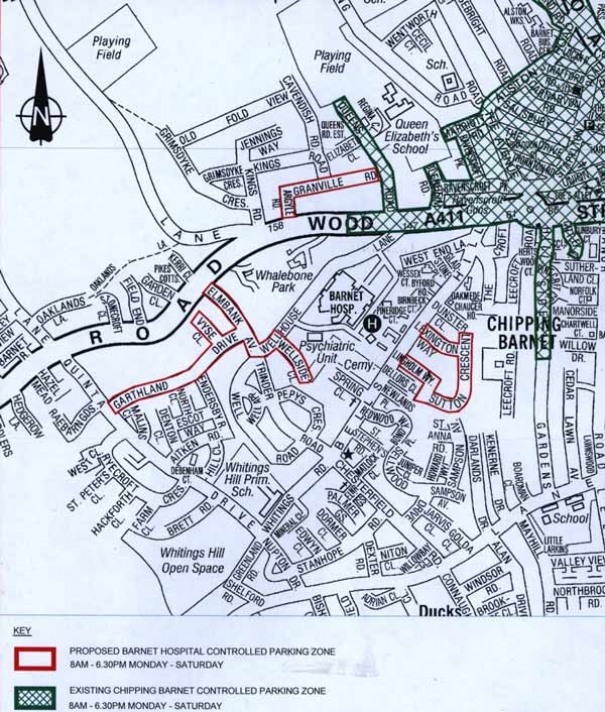 Roads outlined in red will be included in the new Barnet Hospital CPZ. Roads in the existing High Barnet CPZ are hatched in green.
An extension of the High Barnet controlled parking zone to impose restrictions on roads around Barnet Hospital has produced a furious response from adjoining streets that fear they will now have to accommodate many more parked cars and vans.

Residents have until Friday 24 November to comment on the plans for the enlarged CPZ, and also to give their reaction to a series of new waiting restrictions.

Many householders in roads on the edge of the new zone are now rethinking their previous opposition to parking restrictions and say they realise they will be inundated with parked vehicles as hospital patients and visitors move further afield to find a space.

They are proposing to object to the new CPZ because of the impact it would have on their neighbourhoods.

As a result, many intend to urge Barnet Council to hold a fresh round of consultation as they believe more residents now accept that there is now no alternative but to become part of the CPZ.

A vote was held early in 2016 in a wide swathe of rounds to the west of High Barnet, around the hospital and on both sides of Wood Street, as far as Quinta Drive and Galley Lane.

A detailed scheme has now been approved for those roads where the residents reported they had trouble finding parking spaces and favoured restrictions.
The roads to be included in the extended CPZ are:

Residents in three of the roads that rejected joining the CPZ – Kings Road, Cavendish Road and Grimsdyke Crescent – are now preparing letters to be sent to the council outlining their objections and asking for a fresh round of consultations as they believe there is now a majority in their roads for accepting the much larger CPZ as originally proposed in early 2016.

One of the residents organising on behalf of householders in Kings, Cavendish and Grimsdyke, told the Barnet Society that the situation had changed dramatically over the last eighteen months.

They were finding there was an ever-expanding demand for parking spaces for hospital patients and visitors who were either not prepared to pay or could not find room in the hospital car parks.

“We now realise there will also be added pressure for more spaces from people moving into the 114 new homes on the Elmbank estate, and the proposed housing development at Whalebones, so the problem of uncontrolled street parking has to be addressed.”

The CPZ and waiting restrictions will be enforced from 8am to 6.30pm, Monday to Saturday, and the charges for parking permits will range from £45 to £85 depending on engine capacity and emissions levels, with a £10 surcharge for diesel and an extra £10 for each additional vehicle.

Further information about the CPZ extension can be found at www.engage.barnet.gov.uk or email to This email address is being protected from spambots. You need JavaScript enabled to view it.