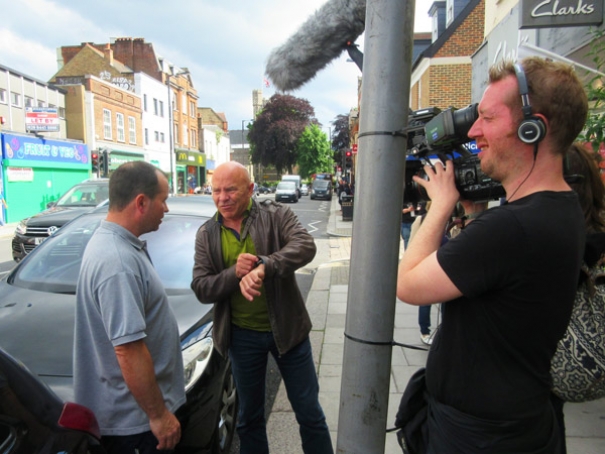 Dominic Littlewood, presenter of Dom on the Spot, interviews Dave Williams who had been fined £55
High Barnet’s notoriety as a hot spot for parking fines is to be featured yet again on national television.   Footage for a new series of Dom on the Spot was filmed in the High Street highlighting Barnet Council’s refusal to even consider a short period of free parking in order to help local traders.

Dominic Littlewood, presenter of the BBC 1 series, was keen to assess the impact of the Barnet Society’s long-running campaign for up to an hour’s free parking in the 63 spaces along the High Street.

Littlewood, and a crew from the production company Two Four, interviewed a motorist who had received an on the spot fine; talked to a traffic enforcement officer about the difficulties of his job; and met traders who feared that High Barnet was becoming a no-go area for short-stay shopping because of the difficulties over parking.

Different offences that people can be fined for are all being discussed in the new series, but a visit to High Barnet topped the list when it came to examining the plight of motorists who end up being fined on the spot.

Gail Laser of Love Barnet, and vice-chair of the Barnet Society, told Mr Littlewood of the growing sense of despair among local people and shopkeepers at Barnet Council’s continued refusal to consider any relaxation of the parking regime introduced four years ago, when cash meters were replaced with a system that relies on pay-by-phone or credit card payments. 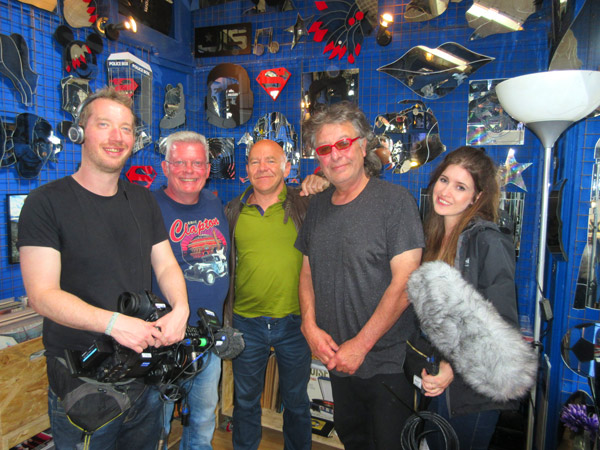 The previous evening at a question-and-answer session, Councillor Richard Cornelius, the council leader, told the Society that an hour’s free parking in High Streets across the borough would cost the authority £3 million a year in lost revenue, and a change of policy would mean increasing the bill for council taxpayers.

Among the traders filmed for Dom on the Spot was Mirror Mad in St Albans Road, where the proprietor Steve Broughton has provided space for Ken Rowland’s vinyl record business, Slim’s Records.

Mr Rowland opened his business last November and is finding potential customers are being frightened off by an incomprehensible parking system and the threat of on-the-spot fines.

Mr Broughton, who established Mirrormad 20 years ago, estimated that his trade had dropped by 40 per cent because of difficulties over parking.

Mr Littlewood and his crew soon had first-hand experience. Outside the Victoria Bakery he met Dave Williams, who had just returned to his car and had received a £55 parking fine for stopping for ten minutes to buy a £1 record in a nearby charity shop.

..I don’t get more money depending on how many fines I issue.

Mr Williams had stopped on a bay that does permit 15 minutes’ free parking between 10am and 4pm, but his stay was over the 4pm time limit.

Outside the British Heart Foundation shop, a traffic enforcement officer had just issued a ticket to another motorist who had not paid to park. 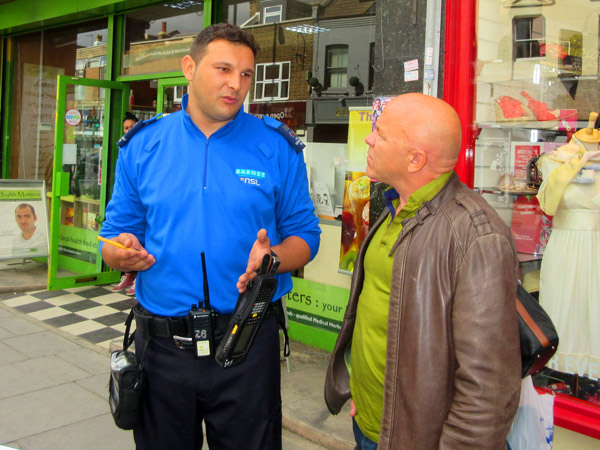 He said he had grown used to being shouted at by angry motorists, but didn’t like it when the abuse was extended to his wife and family.

“Motorists don’t understand I’m doing a job for the community. I enjoy helping people who might need assistance with parking, or advice on how to pay, but I don’t enjoy the swearing.

The enforcement officer denied being under pressure from the parking enforcement company to impose as many fines as possible.

“No, I don’t have to reach a target for fines...I don’t get more money depending on how many fines I issue.”

More in this category: « Still no news on major fashion store for Spires Spires upgrade a Brexit casualty? »