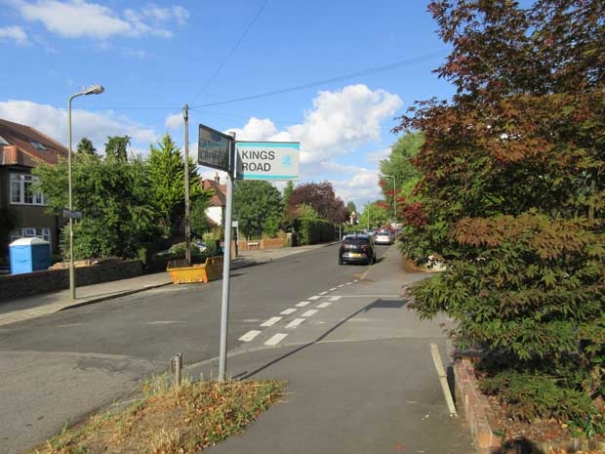 Kings Road and Grimsdyke Crescent are two of roads which the residents fear will now become an unofficial car park for staff and visitors at Barnet Hospital
Residents in four roads that were hoping to be included in the new Barnet Hospital controlled parking zone have been told they may have to wait until early next year before they can be incorporated into the scheme.

A CPZ for ten roads around the hospital takes effect on Monday 10 September following a lengthy campaign for parking restrictions to be introduced in streets off Wellhouse Lane, Bells Hill and Wood Street.

A speeded-up consultation was promised for an extension of the new CPZ to take in Kings Road, Cavendish Road, Grimsdyke Crescent and Jennings Way.

But Barnet Council now says that the legal process of consultation was not completed in time.
As a result of the delay, householders believe their four roads will now be filled up with parked cars of hospital staff and visitors.

Their vote in favour of the CPZ will now be considered by the council’s area committee on 4 October.
If there are no objections, and the extension to the scheme was approved, it could take effect by the end of this year or early next year.

Approval for the Barnet Hospital CPZ was given in mid-February. It is by far the largest extension to parking restrictions in High Barnet in recent years and will impose CPZ restrictions (from 8am to 6.30pm,

Residents in the four roads affected by the delay have complained to Councillor David Longstaff, one of the three High Barnet ward councillors, and to the committee chairman, Councillor Stephen Sowerby.

Householders say the failure to include their roads in the scheme – especially after the residents voted decisively for a CPZ – is “a very serious matter”.

Their fear is that all the parked cars of hospital staff and visitors that will be displaced when the CPZ takes effect will “flood” in to their roads and cause “absolute chaos”.

They believe failure to include their roads in the hospital CPZ is in breach of the area committee’s decision in February and the promise to fast-track consultation for their roads.

Councillor Longstaff has told the residents that the council is blaming the delay on the council elections in May which disrupted work on the design and implementation of the CPZ.

He had assumed that the extension of the CPZ scheme to include the four additional roads would be done at the “same time to minimise the disruption and costs” but this request appeared to have been ignored.

“It is frustrating that this hasn’t taken place at the speed I requested...The officers decided to wait until after the local election ‘purdah’ period for the consultation, a decision which knocks all the timings back.

“There is no way to circumvent the legal process. The results must go to the next area committee for decision.”

In his response, Councillor Sowerby accepts that highways officers “could perhaps have acted a bit quicker” but the residents affected will have to wait only a few more weeks for a final decision.

He rejected their request for the whole of the Barnet Hospital CPZ scheme to be delayed saying that this would incur the “vehement displeasure” of those residents who have campaigned for so long for some relief from the problems caused by hospital parking.

Despite the councillors’ re-assurances that an extension of the CPZ might be only months away, the residents are asking whether the failure to complete the implementation of the extension to the CPZ, as agreed in February, is due to maladministration by Re, the partnership between the council and the outsourcing company Capita, which is responsible for highways within the borough.

The council has admitted that the highways service is one where “performance improvement is needed” and the council is considering whether to return supervision of highways to the council along with several other services including finance, land and property management, strategic planning and cemeteries and crematoriums.