Whalebones. Is this the future? 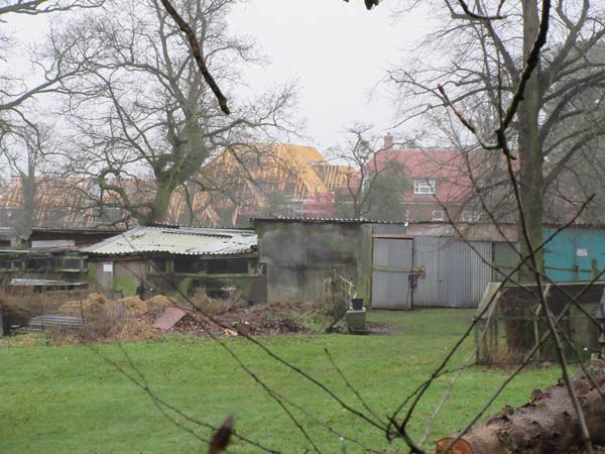 Houses and flats are being built at Elmbank just a few hundred yards from the smallholding in the woods and farmland at Whalebones.
A group of residents campaigning to stop housing development on the Whalebones farmland are investigating several options for safeguarding one of High Barnet’s much-loved green spaces.

At a meeting chaired by the Chipping Barnet MP, Theresa Villiers, the possibilities under discussion included canvassing support for the opening of a city farm for schoolchildren, or possibly the creation of a public garden for patients and visitors at nearby Barnet Hospital.

New flats and homes are nearing completion on adjoining land at Elmbank, and the new development already appears to dwarf the Whalebones small holding where Hill, a Waltham Abbey housebuilder, is preparing plans to redevelop the 11 acres of woods and farmland that make up the Whalebones estate.

Hill have promised further consultations early this year with local residents before submitting a planning application to Barnet Council.

In the first instance the campaign group agreed to seek legal advice to discover whether the trustees for the estate might be under a legal obligation to honour the wishes of the late Gwyneth Cowing who stipulated in her will that the Whalebones smallholding and farm land should remain in agricultural use for as long as practicable.

A spokesman for the developers said that the company was still considering the feedback from last year’s consultations with local residents and organisations and expected to hold further consultations early in 2018 before submitting a planning application.

Hill has an option to purchase the Whalebones land if permission is granted.

Ms Villiers told the meeting that residents would appreciate further talks with Hill’s representatives, but she believed the consensus in the locality was to campaign to find ways to preserve the Whalebones woods and farmland in their entirety.

Initially, the campaign group agreed to seek legal advice on Miss Cowing’s intentions in her will and also to examine the possibility of considering whether to apply for an order declaring that the Whalebones estate was an “asset of community value” – a option that would halt any redevelopment to see if the community could raise sufficient funds to purchase the site.

Whalebones house, which is privately owned, is not involved in the redevelopment.

Of the three fields that make up the Whalebones estate the largest – 7.6 acres – is opposite the Arkley public house and is considered a prime location for new housing.

It adjoins Elmbank where a 3.9-acre site is currently being developed with houses and flats to provide 114 homes.

More in this category: « The Sallet Mothers and babies fight back »