Why no bus from tube to hospital? 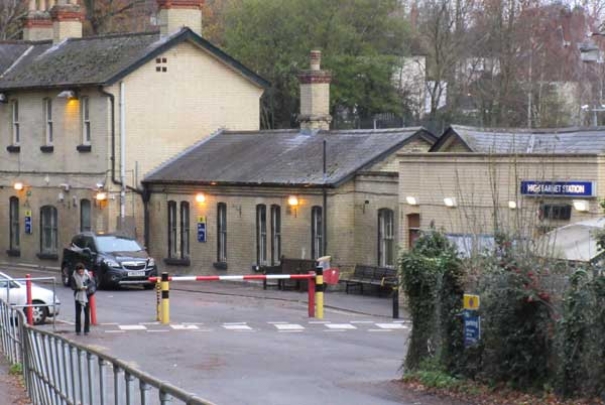 He thinks one way to reduce the unacceptable pressure caused by insufficient parking space in and around the hospital is to encourage more patients, visitors and staff to use public transport.

In another sign of councillors’ anger over the failure of the hospital to address parking congestion, Barnet Council has served a planning enforcement notice requiring the hospital to open up parking spaces that are not currently in use.

Councillor Cornelius told a residents’ meeting at the Bull Theatre (28.11.2017) that Transport for London should reconsider its refusal over recent years to operate a day-time bus service from the tube station up to the hospital.

“Many elderly patients and visitors find the very steep walk out of the tube station too difficult and if there was a bus that went down the station approach road and stopped at the station’s lower entrance, that could help reduce the overall number of car journeys.” 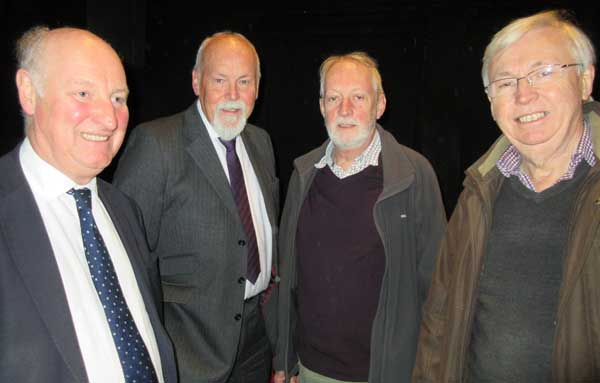 (from left to right) Councillor Corneliius, Bob Burstow, secretary of the Barnet Town Team, Robin Bishop, chair of the Barnet Society, and Gordon Massey, chair of Barnet Residents AssociationThe request for a bus service to operate from the tube station to the hospital and shopping centre was first made by the Barnet Society in 2013, but Transport for London ruled it out on the grounds of cost because there would have to be alterations to the station yard and an improved road junction with Barnet Hill.

Ever since the opening of the lower entrance to the tube station and the installation of disabled access to all three platforms, the society has also campaigned for an enlarged space for setting down and picking up passengers.

Councillor Cornelius told the meeting that he realised a bus link between the tube station and the hospital would be widely welcomed by patients, visitors and staff and was one of the few measures that could be taken to reduce parking problems in the vicinity of the hospital.

“I am very angry about the hospital’s failure to do more to ease the parking pressure. There is rough land around the hospital that could easily be converted into short-term parking and we hope the planning enforcement notice that has been issued will have an effect.”

One questioner, who was greeted with applause, challenged Councillor Cornelius over the new admissions system at Chipping Barnet Library. School children are only admitted if accompanied by an adult and this has caused his family real dismay.

... the council had a responsibility to
safeguard children using the libraries

Councillor Cornelius accepted that the policy of excluding unaccompanied children was an issue, but the council had a responsibility to safeguard children using the libraries.

“What we need is an increase in the number of volunteers who serve in the libraries during unstaffed hours. So far 17,000 people have taken up library cards under the new admissions system, and it was always my determination as council leader to ensure we kept all the libraries open, which is what we have done.

“If we can get more money from the government, and if we can increase the budget for libraries, we would like to extend opening hours with manned operation, encouraging access for children.”

He defended the split planning committee decision to approve plans for the construction of Ark Academy school on the site of the former stadium of Barnet Football Club, and denied that the new school would be a threat to the nearby Totteridge Academy.

We hope older children will walk to the school...

“Ark wanted a much bigger school, with nursery classes and classes for more younger children, but the size of the school has been reduced. We hope older children will walk to the school, and the smaller size for the school, cutting the number of younger pupils, will limit the number of parents’ dropping off children.”

Because of increased demand within the borough for school places he was confident that both Totteridge Academy and the Ark Academy would be fully subscribed.

Another protest that drew applause was from a resident in Kerri Close, near the Arkley public house, who complained about the council’s failure to replace broken paving stones.

Despite having started complaining about the state of the pavements 19 years ago nothing had been done and the resident warned that if the council had failed to respond by the start of the New Year, residents would take the law into their own hands and pay themselves for replacement paving slabs.

Councillor Cornelius promised to investigate the complaint. He accepted that when vehicles were parked on paving slabs which had poor foundations they were easily cracked and became a danger to pedestrians.

Only 12 per cent of our services our outsourced and this is generating large savings, as much as £1 million a month

The answer was to Tarmac the pavement instead as this proved more durable if there was a likelihood of cars mounting the pavement.

Councillor Cornelius suggested that residents annoyed about the state of the pavements outside their homes should put pressure on their ward councillors because their views were taken into account in drawing up the annual schedule for road and pavement repairs.

In the face of a chorus of criticism about the council’s policy to out source services to Capita, the council leader stood his ground.

“Only 12 per cent of our services our outsourced and this is generating large savings, as much as £1 million a month.”

Published in Consultations
Tagged under