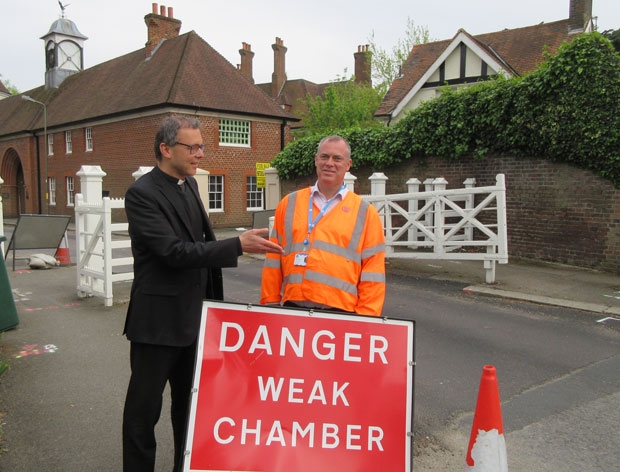 Dr Thomas Renz, rector of St Mary’s Monken Hadley, is shown the site of the 33ft deep shaft that will have to be dug beside the historic gates – a task that project manager Mark Lusher says presents considerable challenges given the number of historic and listed buildings nearby
Motorists face a ten-week closure of the road through the historic gates at Monken Hadley in order to allow Thames Water to carry out much-delayed repair work to a sewer that collapsed earlier this year.

The loss of a popular through route to New Barnet, Cockfosters and Enfield will inevitably lead to a repeat of the traffic congestion – especially through High Barnet town centre -- that occurred during previous work earlier this year.

The through route, along Drury Road, has been closed again to traffic – from May 14 to July 23 – to allow the sinking of a ten-foot wide shaft, to a depth of 33 feet, immediately in front of the Monken Hadley gates to allow the construction of 75-foot long tunnel for a replacement sewer.

According to Mark Lusher, Thames Water’s construction manager for the project – or to give him his full title, the company’s chief sewer rehabilitation engineer – the Monken Hadley sewer repair presents considerable challenges.

The sewer that has collapsed in two places is one of two that goes underground through the pinch point in the road created by the 12-foot wide gap left by the main gate.

Above the sewer that collapsed, which is 33 feet down, is another sewer at 12 feet. There are two sewers because the centre of Monken Hadley -- in front of the historic church St Mary the Virgin – is the crest of a hill and the flow falls away either side.

The problem is compounded by the close proximity of so many listed and historic buildings, including the church, which dates from 1494.

“We have had to do a survey to assess the impact of work on properties within a 25-metre radius of the gate and as a result we have decided to dig out the 33-feet deep shaft by hand, which will of course take time.

“This isn’t the only problem because at the pinch point where the road passes through the central gate there are numerous other underground services, such as gas electricity and telecom, so we will have to proceed with great care.”

Traffic was allowed through Monken Hadley – subject to a weight restriction – from February to mid-May once temporary repairs were carried out following the discovery of the two sewer collapses and several sink holes and gas leaks.

Dr Thomas Renz, rector at St Mary’s, convened a meeting of local residents so that Thames Water could explain the project and discuss the impact on nearby properties.

He said he recognised the problems faced by the company in tackling two sewer collapses in the centre of Monken Hadley, right beside its historic gates.

“We do hope the work is completed on time because we are anxious to start promoting the son et Lumiere which we are staging in November to celebrate the 525th anniversary of St Mary the Virgin church.”