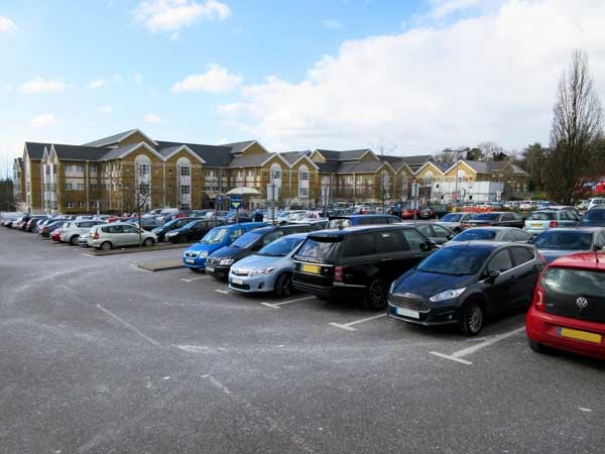 Barnet Hospital car park
A new masterplan for the future redevelopment of the Barnet Hospital site is in preparation and it does include proposals for a new multi-storey car park.

Under discussion is a “potential redevelopment masterplan” for Barnet Hospital and this could result in a planning application being submitted by “autumn 2018 at the earliest” for a new multi-storey car park.

Taking steps to force the hospital to build an upper deck over its car park was one of the options which Barnet Council has been urged to take in an attempt to relieve excessive parking in nearby roads.

Residents in roads off Bells Hill have been told by the Chipping Barnet MP, Theresa Villiers, that Royal Free Trust’s group chief executive, Sir David Sloman, has confirmed that plans are being prepared.

“Sir David sets out the possibility of a redevelopment of the hospital site which could include a multi-storey car park, and this would certainly ease the present problems faced by residents living near the hospital,” said Ms Villiers in her letter to residents.

While welcoming the MP’s support, residents say their hopes for relief from excessive hospital car parking in nearby roads are rather tenuous in view of the “decidedly vague and non-committal language” used by Sir David.

The need for a multi-storey car park was raised at the Barnet Society’s open forum (22.2.2017) when candidates in the May council elections were asked to respond to demands for a further extension to the controlled parking zone in roads around the hospital.

A speeded-up consultation for another possible CPZ extension has now been promised to residents in Kings Road, Cavendish Road, Grimsdyke Crescent and Jennings Way.

Councillor David Longstaff (Conservative) told the meeting that he hopes the council will investigate to see whether there is a legal responsibility on the hospital to tackle inadequate parking for patients, visitors and staff.

He said these problems have resulted from the expansion of the hospital and its failure to think through the consequences of concentrating accident and emergency and other services at Barnet.

Residents in three roads off Bells Hill within an already-agreed extension to the CPZ are concerned that hospital staff are to be allowed to use 25 CPZ parking permits.

They believe the hospital has ample spare land that could easily be used to provide additional parking spaces.

More in this category: « The Mayor of London New London Plan Demolition eats away at local landmark »