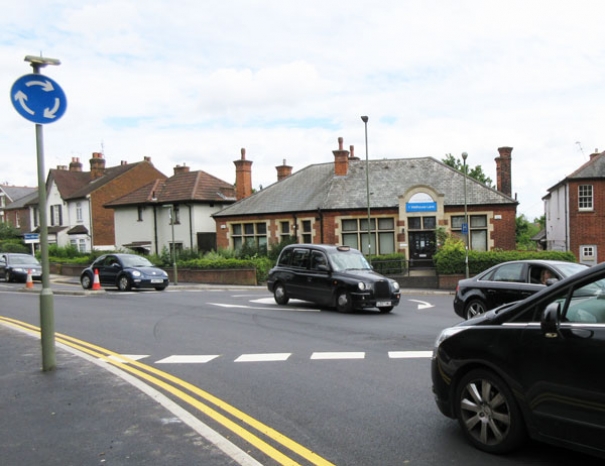 The Wellhouse mini roundabout
Six months to install a mini-roundabout – an entry perhaps for the Guinness Book of Records – but worth the wait if safety and traffic flow improves at one of High Barnet’s notorious traffic junctions.

Work has finally been completed on road realignment and resurfacing at the junction of Wellhouse Lane and Wood Street.

As well as a mini-roundabout, the new £121,000 layout, first proposed in 2013, includes an additional zebra crossing, improved pavements, and road resurfacing along Wellhouse Lane, the main approach road to Barnet Hospital.

The new layout has caught some motorists by surprise, with some vehicles travelling along Wood Street, towards Arkley, finding the turn too sharp.

Delays to the project occurred when the contractors, Conway, discovered an entanglement of pipes for utility services, including water and electricity, that took months to sort out.

The junction had become a traffic blackspot. It was the scene of eight personal-injury road accidents in the two years to 2012.

Conditions were exacerbated by the much-increased flow of ambulances to the hospital’s expanded accident and emergency service, and by the diversion of buses on major services such as the 263 and 307 to terminate at the Wellhouse Lane terminus.

Work on the scheme, designed by Capita for Barnet Council, began in early January. Extensive excavation was required, and the final road resurfacing necessitated road closures and diversions to ensure that there was 24-hour access to the hospital’s accident and emergency department.

When agreed in 2014, an alternative plan was proposed by Capita to install traffic lights at the junction, but this was rejected on the grounds that it would cost an additional £105,000.

The total cost of the project, which will include measures to improve disabled access at nearby bus stops in Wood Street, was estimated to be £226,000 in 2014.

Local residents will be waiting to see with interest whether installation of the Wellhouse Lane round-about helps to reduce congestion at the adjacent junction with Queen’s Road, which is the main approach to Queen Elizabeth’s Boys’ School.

Ten coaches and a dozen executive-style mini-buses turn in or out of Queen’s Road and Wood Street four times a day, dropping off and collecting pupils from all over north and north-west London.

The new layout faces its ultimate test on QE Boys’ open evening (6.7.2017) when the school gets over 3,000 visitors between 2.30pm and 9.30pm – and the resulting traffic jams often extend down Barnet Hill as far as the Everyman cinema, and along the Barnet Road to the Arkley public house.