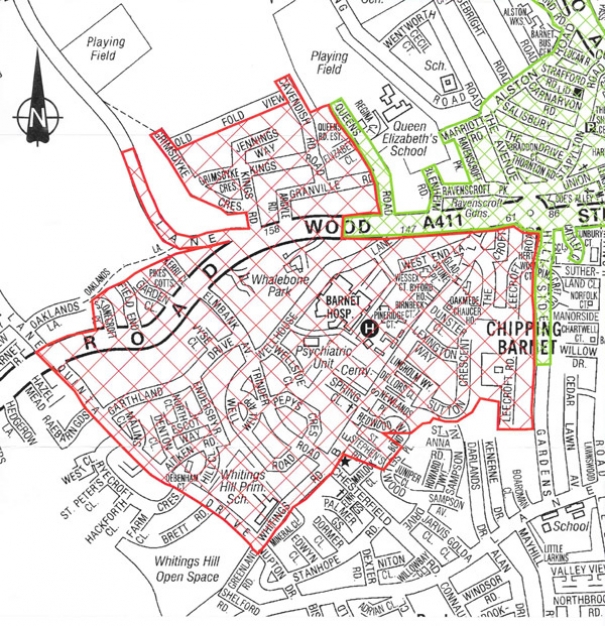 Map of proposed new Controlled Parking Zone
Residents are being consulted about the possibility of a massive extension to High Barnet’s controlled parking zone to cope with uncontrolled off-street car parking and traffic congestion following recent expansion at Barnet Hospital.

Roads in a wide area around the hospital are increasingly being filled by the vehicles of outpatients, staff and visitors who wish to avoid paying the charges imposed in the hospital’s own car parks.

Local householders have until Wednesday 15 June to respond to what is described as an “informal parking consultation” to see whether there is support for the introduction of parking controls. 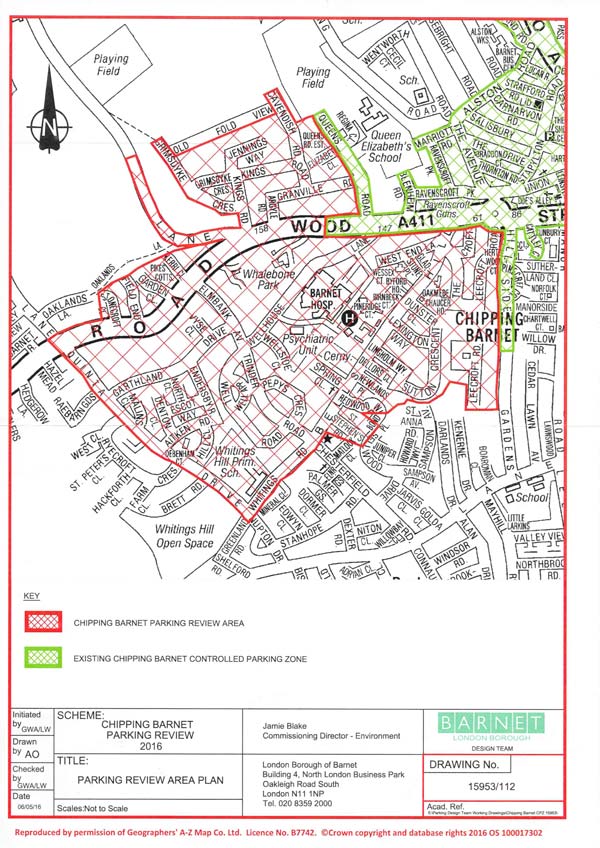 The area covered by the parking review extends from the existing town centre controlled parking zone all the way westwards – on both sides of Wood Street and Barnet Road – to include Quinta Drive; from Galley Lane and Old Fold View in the north to Whitings Road in the south; and to Leecroft Road in the east.

Barnet Council says it has launched the consultation because of concern about the “high level of perceived ‘non-resident’ parking in the uncontrolled roads around Barnet Hospital resulting in fewer places for residents to park”.

Subject to the level of support, the council would introduce controls to deter all day commuter-type parking, protect residents’ parking, allow for visitor parking, and improve parking layout and traffic flow.

If roads were included in a new CPZ resident parking bays and yellow line waiting restrictions would be marked on the street and residents wishing to park in the resident bays would need to purchase a valid permit.

Pressure for the CPZ to be extended has come from residents in the roads closest to the hospital, and especially in streets to the north of Wood Street and Barnet Road where there is additional uncontrolled parking caused by the vehicles of pupils and parents at Queen Elizabeth’s Boys School.

At the busiest times of the day there is considerable congestion when coaches and mini-buses are dropping off and collecting pupils.

To the south of Wood Street and Barnet Road, ambulances and the cars of para-medics approaching and leaving Barnet Hospital have to cope with congested roads such as Wellhouse Lane and Elmbank Avenue.

Parked vehicles restrict the flow of traffic and anger residents who struggle to gain access to their properties because of the cars parked by outpatients rushing to appointments or parents waiting for their children.

Residents fear there will be further pressure on parking spaces in and around Galley Lane and Elmbank Avenue once Linden Homes has completed the construction of 114 new homes on the site of the former nurses’ homes at Elmbank.

When Linden Homes obtained planning permission, the developers promised it would contribute to a traffic survey in the area.

Residents can respond to an on-line questionnaire at www.surveymonkey.co.uk/r/BarnetHospitalInformalConsultation or request a paper copy by phoning 020 8359 or emailing This email address is being protected from spambots. You need JavaScript enabled to view it.