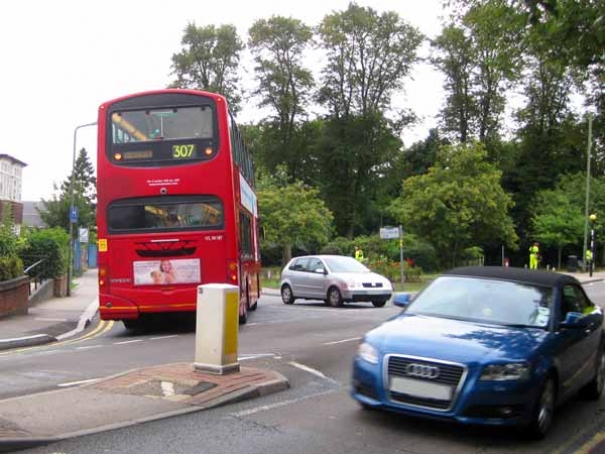 A £232,000 road improvement scheme prepared by the Council’s in-house consultancy Capita is now out for consultation.

An assessment of the scheme has been prepared for the Barnet Society by Peter Bradburn, who is generally supportive of the proposed improvement but is seeking reassurance on several issues.

Capita proposed as an alternative the installation of traffic lights at the Wood Street/Wellhouse Lane junction, but that would have cost an additional £105,000, and the council’s recommended proposal is for a mini-roundabout, a new zebra crossing across Wellhouse Lane to provide safer access to Barnet Hospital, and improvements to the Wood Street bus stops.

In recent years, following construction of a bus terminus outside Barnet Hospital for the 263 and 307 routes, the junction has become increasingly hazardous for motorists and pedestrians and especially for hospital outpatients and pupils at Queen Elizabeth’s Boys’ School.

There were eight personal-injury road accidents at or around the junction in the two years up to December 2012, and an earlier report prepared for the council said visibility needs to be improved, not least because Wellhouse Lane is a “high-frequency” route for buses (routes 263, 307 and 384), ambulances and other emergency services, and speeding could pose a concern.

Read in full Peter Bradburn’s assessment of the improvements planned for the Wood Street/Wellhouse Lane junction in the attachment to this article below.

More in this category: « One hour free at Moxon Street car park High Barnet’s CPZ to double in size? »