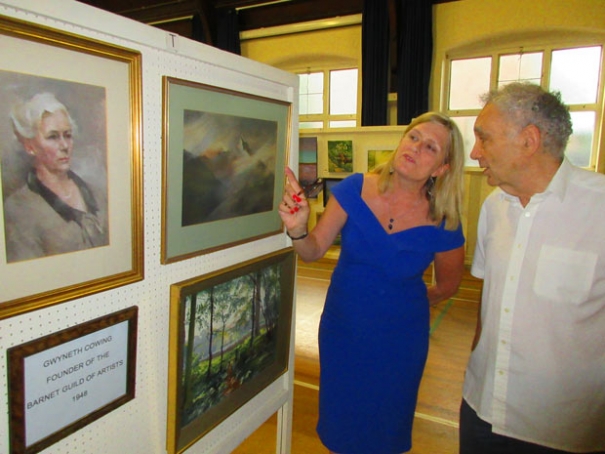 A portrait of founder Gwyneth Cowing and some of her paintings are admired by Nichola Hunt, chair of the Barnet Guild of Artists and guild secretary Bryan Polikoff
Barnet Guild of Artists’ 70th annual summer exhibition is dedicated to its founder, Gwyneth Cowing, who in 1948 brought together a group of local artists to stage their first show at Queen Elizabeth’s Girls’ School.

A water colour portrait, and some of her own paintings, take pride of place among a bumper display of 170 entries.

At a preview of the exhibition, which is being held at the Pennefather Hall, St Albans Road -- and is open to the public until Saturday 4 August -- the guild’s chair, Nichola Hunt, told members and friends that the guild wanted to take the opportunity to pay tribute to the late Miss Cowing.

“We owe her so much, and this is our chance to remember her vision and her work,” said Ms Hunt.

In addition to the portrait, the display features some of Miss Cowing’s work, including her 1967 oil painting “September Morning” which looks across the fields towards the farm at her former home Whalebones, where she built a studio for the guild in the 1960s.

Miss Cowing’s trustees are currently drawing up plans to redevelop the Whalebones woods and farmland with an estate of up to 180 homes, two new green spaces and footpaths from Wood Street to both Barnet Hospital and the Wellhouse Lane bus terminal.

Ms Hunt said the trustees’ plans include the construction of a new studio for the guild, as well as space for the Barnet Beekeepers Association.

“The trustees are recommending that the guild seeks charitable status in the hope that the trustees can then gift us the new studio.

“We are preparing to become a charity, but clearly any new building erected by the trustees might have a wider community use, so we shall have to wait to see what transpires if the trustees secure planning permission for their redevelopment.”

Councillor David Longstaff, a former Mayor of Barnet, opened the exhibition and praised guild members for their enthusiasm and dedication. He paid tribute to the work of the guild’s former treasurer and vice chair, the late Fred Howett.

“I first met Fred in 1994 and he did so much to keep the guild together and on an even keel. He was a great organiser of local art exhibitions and his advice and support is sadly missed.”

An innovation this year was a display of two abstract paintings by local artist Dan Kirschner which he hopes will be studied and viewed while listening to music.

“I put my vision to what I hear, and I hope viewers will share the experience and enjoy the music which inspired me,” said Mr Kirschner.

The two abstracts on display are Improvisation on Pines of Rome by Respigi (an abstract in acrylic on canvas in four columns representing the four movements), and Improvisation on Balero by Ravel which includes a portrait of the conductor Valery Gergiev, in acrylic and oil on canvas.

Another highlight of the exhibition are caricatures by the illustrator Simon Ellinas.