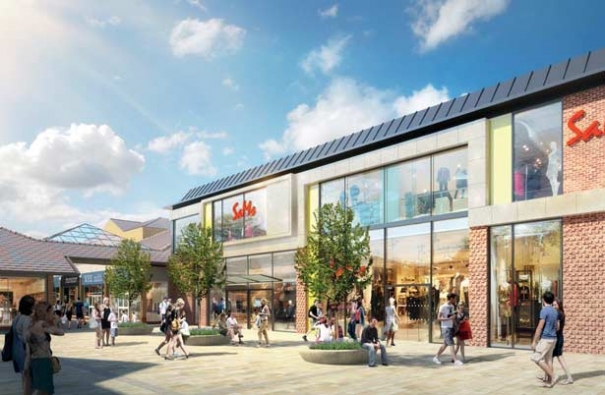 The Spires - the latest proposal
An announcement that had been expected in early June about a go-ahead for the Spires shopping centre redevelopment has still not materialised, and there is still no date when work might start.

Hunter Real Estate Investment deny that the upgrade of the High Barnet shopping mall is on pause because of a widespread freeze on new retail and office construction following the Leave vote in the European Union Referendum.

Talks are said to be continuing, and Hunter Real Estate insist the delay is for no other reason than that the company wants to make sure “everything is in line” before a start date is announced.

The Spires was purchased for £40 million in July 2015 by a Canadian pension fund, Alberta Investment Management Corporation, and an announcement had been expected two weeks before the Referendum vote on the go ahead for a £7 million upgrade.

The redevelopment includes a new two-storey store to be built for an “international fashion brand”, rumoured to be the Swedish fashion chain H&M.

A go-ahead for the upgrade, that also includes three new restaurants, is dependent on securing a tenant for the new anchor store. Planning approval for the redevelopment was given by Barnet Council in May.

In early June, the Barnet Society was told that until the deal had been agreed with the international fashion brand, it would not be possible to say when work might commence.

In response to questions from the Society, Hunter Real Estate insist that the Spires project is not on pause because of a post-Brexit freeze on new construction projects.

Talks are continuing with lawyers for the various parties involved, and they were said to be taking longer than expected.

Leading retailers such as Tesco have announced a freeze on further store developments until there is clarity about the UK’s future relationship with the EU.

Other retailers are warning that projects will be delayed because of a feared fall-off in High Street spending.

AIMCo’s £40 million purchase of the Spires from the Williams Pears group is the largest property investment in High Barnet.

When the deal was announced, AIMCo said it had made the acquisition because the Spires was prime retail space in “one of London’s largest and fastest-growing boroughs, as well as one of the most affluent.”

In the referendum, the London Borough of Barnet voted Remain by 62 to 38 per cent.

The Chipping Barnet MP, Mrs Theresa Villiers, the Secretary of State for Northern Ireland, was a leading campaigner in the Leave campaign.

She has backed Andrea Leadsom in the Conservative Party’s leadership contest.