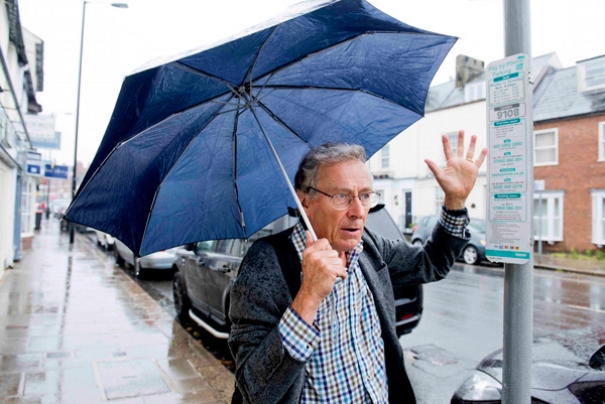 Getting on his high horse: Nick Jones, Barnet Society Chair, arguing for free parking on ITV’s Parking Wars
Barnet Council has finally agreed to review its parking charges along Barnet High Street following a campaign by the Barnet Society on behalf of local residents, shoppers and traders.

For months on end the council has refused to take any notice of the Society’s plea for a short period of free parking – from 30 minutes to an hour – in order to help the High Street compete with nearby shopping centres where there are no parking restrictions.

However, a review of parking charges has now been agreed by the council’s environment committee.

High Barnet’s complaint that its town centre is being penalised by a repressive parking regime achieved national prominence in September in the latest series of ITV’s Parking Wars.

The programme followed the progress of the Society’s campaign to force the council to change its mind. A petition backed by 2,104 signatures was handed to the environment committee at its March meeting by the Society’s honorary secretary, Jonathan Supran.

Anna Slater, chief reporter of the Barnet Times, presented a second petition, backed by 5,000 signatures, that called for an hour’s free parking in high streets across the borough.

All told there are 63 parking spaces along the High Street between High Barnet tube station and Hadley Green, and the Society’s argument in support of a free period of parking is that there are often empty spaces away from the centre of the High Street.

At the March committee meeting Cllr Cohen claimed there was an 85 per cent usage of the High Street parking bays and the three council-owned car parks.

After this was disputed by the Society, Cllr Cohen promised to supply the Society with a breakdown of car-parking transactions within two weeks.

Seven months have elapsed, yet the council has failed to supply any further information, and there has been no sign of a detailed breakdown.

The Society hopes the promised review of parking in the High Street might finally demonstrate that better use could be made of the 63 spaces.

The review promised by the environment committee into parking charges has raised uncertainty about the status of a separate feasibility study by the highways committee into plans (backed by the Society) for a series of build-outs aimed at creating extra pavement space along the High Street and improving its appearance.

Progress with this review appears to have stalled, and could conflict with the charging review as council officials have suggested that pavement build-outs along the High Street might mean the loss of up to nine parking spaces and loading bays.