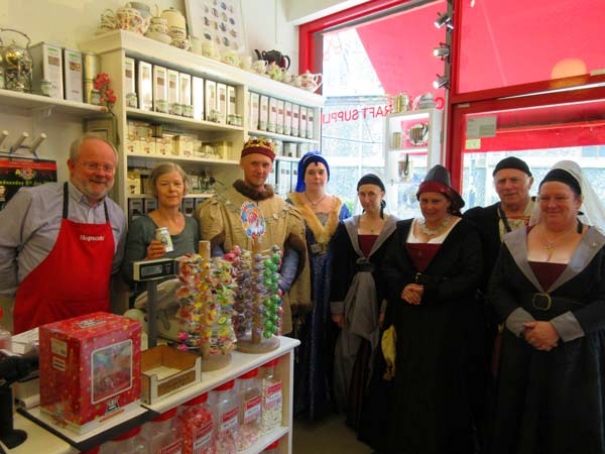 Hopscotch sweetshop, in High Street – which is selling a specially-prepared blend of Battle of Barnet tea – had a visit from members of the Medieval Siege Society. From left to right, Michael and Alice Kentish, Chris Farncomme (King Edward IV), Liz Bowman, Jenny Mix, Linda Godden, Peter Grande and Tracey Jackson.
A cup of Battle of Barnet tea or a pint of Battle of Barnet bitter are just two of the tempting offers that are being lined up to promote the Barnet Medieval Festival at the Byng Road playing fields over the weekend of Saturday & Sunday, June 9 & 10.

Alongside either a cup of tea or glass of beer there might also be room for some bread and cheese.

Again, there is a battle theme on offer with a selection of Lancashire and Yorkshire cheeses to choose from – fare that would no doubt have appealed to the foot soldiers as the Lancastrian and Yorkist armies as they readied themselves for one of the key engagements in the Wars of the Roses.

On both days of the festival, there is a packed programme of medieval displays and re-enactments of scenes from the battles of St Albans (1461) and Barnet (1471) – and admission to the event is free. 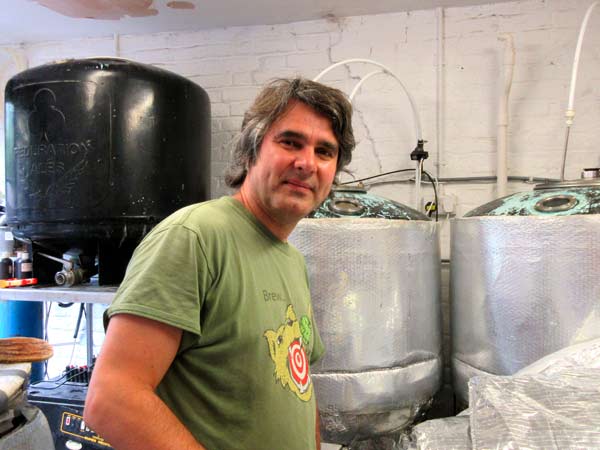 Re-enactors from the Medieval Siege Society and other members of the Wars of the Roses Federation, dressed in armour and the livery of the Lancastrians and Yorkists and other noblemen and women, will take part in staged combat, give archery displays and fight mock battle scenes with handguns and cannons.

Battle of Barnet tea is a blend that has been specially prepared by Michael and Alice Kentish at their High Street shop, Hopscotch Sweets, and the two key ingredients reflect Barnet’s role in the Wars of the Roses.

The blend is a mix of a green Chinese tea called gunpowder – a reminder that the Battle of Barnet featured the first extensive use of “handgonnes” – and rose petals.

“The flavour is green tea but slightly smoky with a hint of rose petals, so you could say it is a colourful explosion of flavours to celebrate the Battle of Barnet”, said Alice Kentish.

“This is a first attempt at blending our own tea and it has been a lot of fun. Our first batch of Battle of Barnet tea sold out fast and more stock is on order, ready for the festival weekend.”

Battle of Barnet bitter has already been tried out by customers at the Black Horse public house in Wood Street where the pub’s brewer, Nick Zivkovic is preparing for another 80-gallon brew-up.

“When we first offered Battle of Barnet best bitter – 4.4 strength – it sold out within weeks, so we know it’s popular.”

Mr Zivkovic already has several local bitters to his name – Barnet Gold, and also End of Line, celebrating High Barnet as the last stop on the Northern Line.

To further his success as a brewer Mr Zivkovic is about to sit part two of his Brewery Diploma, which is all about fermentation and yeast technology. After part three of the diploma, he could go on to take the Master Brewer exam set by the Institute of Brewing and Distilling.

Just around the corner from the Black Horse, at the Union Street Cheese shop, the proprietor Mark Roberts is preparing his Battle of Barnet display. Top of the Yorkshire cheeses will be Wensleydale blue from the Hawes creamery and Lancashire will be well represented with Kirkham, Blackstick Blue and Ribblesdale hard goat’s cheese.

Union Street cheese opened in February and will have a stall at the medieval festival.

The organisers are appealing for volunteers to help at the medieval festival (stewarding, manning the ‘lost children’ point, helping set up/pack away, etc). Anyone interested should email Susan Skedd at This email address is being protected from spambots. You need JavaScript enabled to view it.

Parking will be severely limited at the festival and visitors are encouraged to approach the Byng Road playing fields by foot if at all possible.

More in this category: « Skating – a Christmas treat Battle of Barnet: beaten by coronavirus »