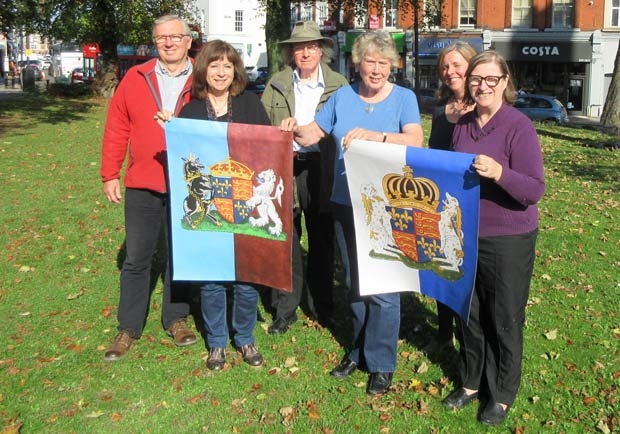 Volunteers rallying support from left to right, Dennis Bird, Hilary Harrison, Howard Simmons, Margaret Luck, Susan Skedd and Dorothy Cohen
Volunteers hoping to organise a repeat of this summer’s Barnet Medieval Festival are rallying support for pledges of a minimum of £2 per person in this year’s Mayor of London crowdfunding appeal.

Funding will be needed to help finance a second re-enactment of the 1471 Battle of Barnet – a spectacle that attracted 6,000 spectators last June.

This year’s event was funded by a grant from the Heritage Lottery Fund as part of its support for the Battle of Barnet project which has included an archaeological investigation of the likely battlefield site and numerous initiatives to encourage and sustain interest in Barnet’s role in the Wars of the Roses.

The aim of the crowdfunding appeal, backed by Barnet Town Team, is to reinforce Chipping Barnet’s identity as an historic market town by reconnecting to its medieval past with a sustainable annual community festival.

The largest pledge so far is for £500 by the Battlefields Society and the organisers are hoping that as many residents as possible will pledge the minimum of £2 so as to indicate to the Mayor of London that the proposed festival has strong local support.

Pledges can be made via www.spacehive.com/making-barnet-a-festival-town

In a bid to encourage interest the Medieval Siege Society – which was one of the societies taking part in this summer’s re-enactment – is proposing to organise a draw among those making a pledge.

The winner would be called upon to fire the first round from a medieval cannon and start the re-enactment – a task performed this year by Martin Russell, Deputy Lord Lieutenant of Barnet.

The closing date for pledge is 9 December and the organisers intend to spend the coming weeks appealing for pledges from local businesses and traders.

If a festival next year gets the go ahead, the aim will be to hang even more heraldic banners along Barnet High Street and organise a wide range of events in the week preceding the festival weekend.