Coats of arms the length of Barnet High Street 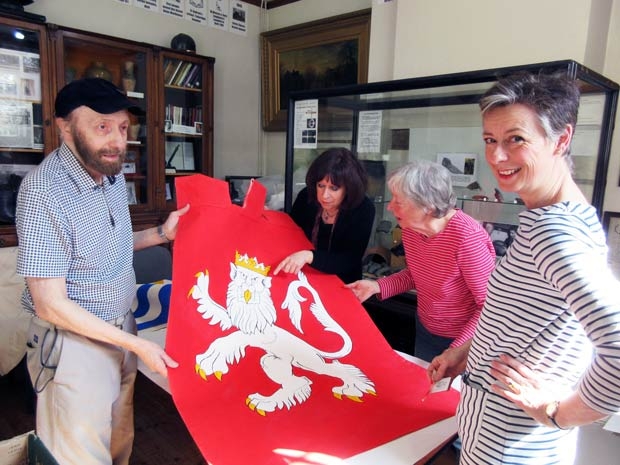 A rampant lion is the centrepiece of Sir John Marney’s heraldic banner, one of 70 to be displayed this summer in Barnet High Street. From left to right, Geoffrey Wheeler, historian and photographer, who researched Wars of the Roses coats of arms, Hilary Harrison, who co-ordinated the painting, and volunteers Irene Nichols and Gwyneth Hibbett
Twice as many Wars of the Roses heraldic banners will be hung from lamp standards along Barnet High Street this summer – just one of the attractions planned to commemorate the Battle of Barnet, and to promote a repeat of last year’s highly-successful Barnet Medieval Festival.

Events kick-off on Saturday 13 April when medieval re-enactors from the Yorkists and Lancastrians will be in the High Street re-enacting events in the build-up to the battle that took place near Hadley Highstone on 14 April 1471.

Volunteers at Barnet Museum are currently finishing off painting the 70 banners that will fill the High Street all the way from Queen Elizabeth’s Girls’ School to the Monken Holt and which will be on display from mid-May to the end of August.

Plans are also well underway for this year’s medieval festival to be held on the weekend of June 8-9 at the Byng Road playing fields of Barnet Elizabethans Rugby Club.

Over 350 medieval re-enactors in full armour, livery and costume – drawn from the House of Bayard – will be taking part in mock battle scenes and medieval living history displays.

The High Street re-enactments on Saturday 13 April will officially launch this year’s festival and the organisers are hoping to recruit more volunteers to help run events in June.

To give a flavour of what might have happened on the eve of the Battle of Barnet, Yorkist re-enactors will set up camp in the churchyard of the parish church while Lancastrian forces will be sweeping the High Street and the Spires shopping centre in search of recruits.

Commanders, men at arms, archers and noblewomen will assemble from 11am to 12.30pm; at 2pm there will be a clash of arms and confrontation between Edward IV and the Earl of Warwick in the churchyard; and prayers in St John the Baptist at 2.30pm.

Work on the design and painting of the medieval banners for the High Street has been underway all winter under the guidance of historian and photographer Geoffrey Wheeler who has spent years researching the banners of the opposing armies in the Wars of the Roses.

He has compiled details of the 130 family coats of arms connected to the Battle of Barnet after studying lists of those knighted or killed at the battle and by examining letters and manuscripts. 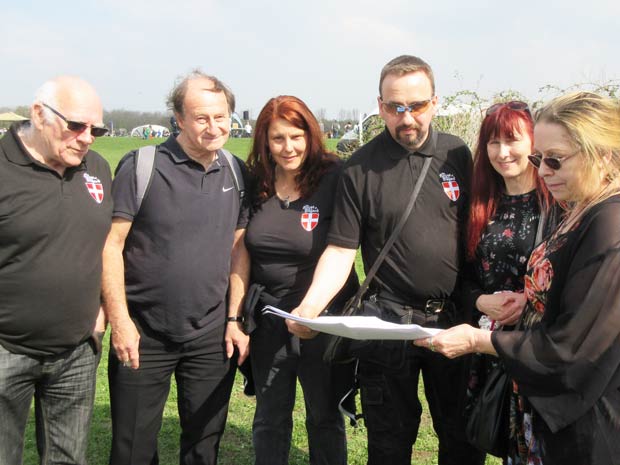 Members of the House of Bayard medieval re-enactors preparing their plans for battle re-enactments and living history displays at this year’s Barnet Medieval Festival on the weekend of June 8-9. From left to right, Peter Grand, Rodney Burt, Linda Godden, Ben Godden, Jenny Mix and Shelagh Best.Such has been the interest in the banners – many of which have been on display all winter in the Spires shopping centre – that Mr Wheeler hopes to publish the images on a series of postcards.

Only a handful of the 70 to go on display in the High Street remain to be painted and they will be installed on lamp standards as from mid-May.

Hilary Harrison, who has been co-ordinating work on the banners, said the impact of banners flying all the way up the High Street from the High Barnet tube station should be “stunning” and do even more to put the Battle of Barnet on the map.

Organisers hope that this year’s medieval festival in June will more than match the popularity of last year’s celebration with several new attractions.

A wide range of traders and craftspeople have booked places for a medieval market and new activities will include have-a-go-archery.

The festival will include an exhibition of paintings by the renowned medieval military artist Graham Turner who is creating a specially-commissioned artwork for this year’s festival poster.

A preliminary sketch of the picture showed King Edward IV wielding a poleaxe at the height of the confrontation between the Yorkist and Lancastrian armies.

Volunteers and others offering to help with promoting and financing this year’s festival are asked to contact the festival co-ordinator Susan Skedd at: This email address is being protected from spambots. You need JavaScript enabled to view it.

More in this category: « Accommodation for nurses: old and new When I Grow Up idea wins business award »