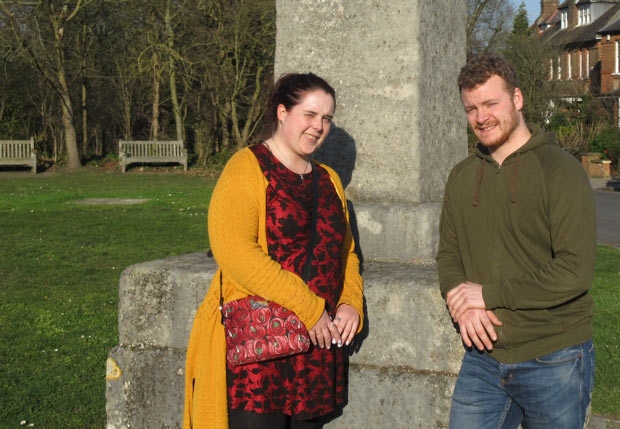 Liz Bown, chair of the Barnet 1471 Battlefields Society, and committee member Ed Jones, are working on plans for a wreath laying ceremony at Hadley Highstone to commemorate those who fell at the Battle of Barnet of 14 April 1471.
Plans are afoot – if funding can be obtained from the Heritage Lottery Fund – to re-start an archaeological investigation in a renewed attempt to find the precise site of the 1471 Battle of Barnet.

A metal detector survey carried out in fields off Kitts End Lane, under the auspices of the Battle of Barnet Project, failed to unearth military artefacts or other definite proof that this was the battlefield.

However, Dr Glenn Foard, a leading military archaeologist at Huddersfield University, believes this area was the likely location.

He is preparing a report on the Barnet investigation as part of his studies into other Wars of the Roses battlefields at Bosworth, Tamworth and Mortimer’s Cross.

The fresh application for Heritage Lottery support is being made by the Barnet 1471 Battlefields Society and this time the archaeological survey and excavation would cover fields closer to Kitts End Farm that were not previously surveyed, and also include part of the golf course of Old Fold Manor Golf Club.

Liz Bown, chair of the 1471 Battlefields Society, told the Barnet Society that the HLF has asked for a detailed proposal to be submitted.

The Society is applying for a grant of up to £560,000 to finance a five-year investigation to be conducted under the direction of Peter Masters, a battlefield archaeologist at Cranfield University, and Mike Ingram, a military historian, who has worked on other Wars of the Roses battlefields.

“Our initial investigations at Barnet, using ground-penetrating radar, indicate that this previously unexamined area does have the right medieval landscape for the battlefield,” said Ms Bown.

“When Peter Masters surveyed the fields nearer Kitts End Farm and the golf course using ground-penetrating radar he found signs of medieval ridge and furrow farmland and this was a characteristic of the land in other battlefields from the Wars of the Roses.

“If we can get support from HLF we would have a 25-day survey and excavation each year, starting in August or September, depending on when harvesting is complete.

“Our aim would be to recruit as many volunteers as possible – just one of the ways in which we hope to involve the local community.”

If the project gets the go ahead, the society has long-term plans to open a visitor centre as close as possible to Hadley Highstone.

Plans are being prepared for a second application to HLF for a grant of up to £2.5 million to purchase a suitable property. This would house exhibits and interactive digital maps of the Wars of the Roses and the combat at Barnet between the Yorkist and Lancastrian armies.

The 1471 Society was established in November 2017 and was awarded a grant of £1,500 by Barnet Council for a programme of work involving local schools.

A programme of events for the year ahead includes a medieval banquet to be held at Church House, Barnet, on Saturday 13 April, to be followed on Sunday 14 April by a wreath-laying service at Hadley Highstone to commemorate the anniversary of the Battle of Barnet.

Stuart Peachy, a food historian, has agreed to prepare the banquet which would include hot and cold, sweet and savoury dishes.  Entertainment would be provided by the Trouvere Medieval Minstrels.

For further details contact: This email address is being protected from spambots. You need JavaScript enabled to view it.

More in this category: « Barnet Beyond Brexit - Update Demolition to start soon at Marie Foster site »