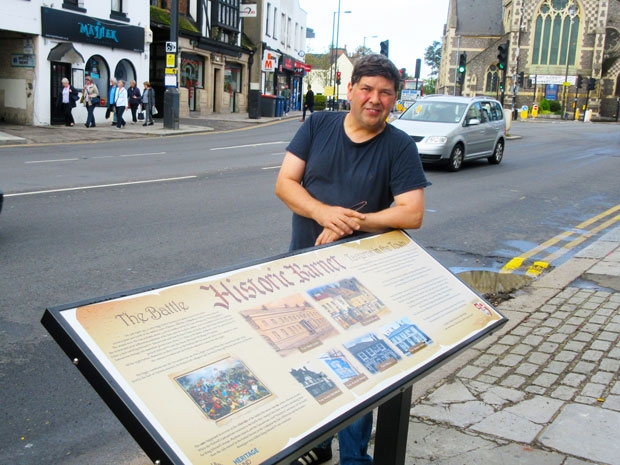 Gary Murphy, licensee of the Mitre, and the Historic Barnet sign before it was deemed hazardous for pedestrians
A Barnet Museum information sign that told the history of the coaching taverns that once lined Barnet High Street was removed within days after Barnet Council’s highways department declared it was a hazard for pedestrians.

No sooner had Gary Murphy, licensee of the Mitre public house – that dates from 1636 – congratulated the museum on its initiative than the sign was hit by a vehicle that mounted the kerb and the sign was declared an obstruction on the pavement.

Even though the museum had spent months obtaining permission for Historic Barnet signs along the High Street, the highways department ordered the removal of the board from outside the Mitre on the grounds that it was “hazardous to pedestrians” under the 1980 Highways Act.

“A disappointing and disheartening day” was how volunteers at the museum summed up their feelings when the sign, which had been badly damaged in one corner, had to be removed from the High Street.

A few days earlier Mr Murphy told the Barnet Society that the sign outside the Mitre had been greatly appreciated by his customers and by people walking along the High Street.

A disappointing and disheartening day

“The information board attracted attention immediately and it was obvious people really are interested to read about the taverns that once lined the High Street.”

In the days when Barnet was a famous coaching town on the road from London to York up to 150 coaches a day used to pass along the High Street.

There has been a similarly warm and appreciative welcome for the Historic Barnet information sign installed in Church Passage, explaining the history of the Barnet parish church of St John the Baptist, and another beside the old drinking fountain and pond at the High Street end of Hadley Green.

Each information board explains the history of Barnet and its importance as the site of the 1471 Battle of Barnet.

Museum volunteers researched and produced the boards as part of the Battle of Barnet project, which was financed in large part by the Heritage Lottery Fund and which inspired the hanging of medieval banners along the High Street during the summer months and the Barnet Medieval Festival which is to be held again next June for the third year running.