Battle of Barnet: beaten by coronavirus 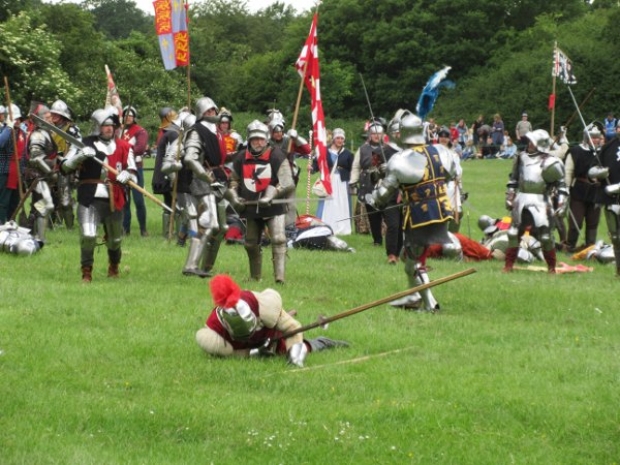 2019 re-enactment of 1471 Battle of Barnet
Barnet's highly successful medieval festival, due to have been staged during the last weekend in May, is just one of the many local events that are having to be postponed or cancelled because of the coronavirus crisis.  Organisers have rescheduled this year's festival from its original date of May 30-31 to the weekend of September 19-20.

All the medieval re-enactment groups and socities that help to bring the 1471 Battle of Barnet to life have been automatically re-booked for September and it is hoped as many as possible of those involved will manage to make the new date.

Last year's festival attracted over 350 medieval re-enactors representing Yorkist and Lancastrian forces and they enthralled a crowd of over 5,000 on the final day ensuring that the event is now recognised as London's top attraction for Wars of the Roses military enthusiasts.

As the impact of the lockdown over the pandemic evolves over the coming weeks the organisers will keep the date under review and the festival, now in its third year, will only be held "if it is safe to do so".

Numerous events planned for the spring and early summer are adding to the list of those attractions being rescheduled.

Among the first casualties was the spring clean litter pick organised by High Barnet Green Beings for Sunday 29 March.

After the success of last year's spring clean-up, organiser Nanna Blomquist had been expecting a tremendous turnout when volunteers assembled at the Court House Recreation Ground and were promised a hot free drink courtesy of the Old Courthouse Cafe.

Organisers of the nationwide Great British Spring Clean are re-arranging the campaign and hope litter picking events will run from September 11 to 27.

Spontaneous events praising the dedication of NHS workers such as the nationwide clapping help at 8pm on Thursday 26 March attracted support across High Barnet when many of those in self-isolation stood briefly on doorsteps outside their homes joining in.

Adding to the long list of coronavirus interruptions is the suspension of Barnet's twice-weekly market outside the Spires shopping centre which was held for the last time on Saturday 21 March.

Some shoppers at the stall were already wearing protective masks and the Bones' notices on piles of fruit had been adjusted for the latest self-distancing regime: "Don't touch, squeeze or sniff."

Published in Events
Tagged under
More in this category: « Taste the flavour of Barnet’s medieval festival Advice wanted on widening the Bull Theatre's repertoire »