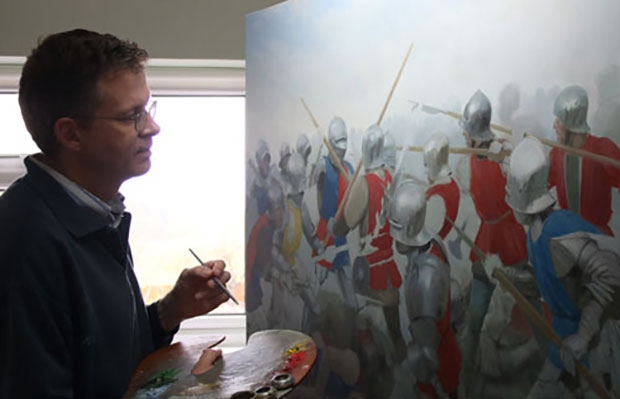 Medieval artist Graham Turner at work on his oil painting of the Battle of Barnet
Wars of the Roses heraldic banners, which are on display the full length of Barnet High Street, will provide a spectacular welcome for visitors to the second Barnet Medieval Festival to be held over the weekend of Saturday and Sunday, June 8 and 9.

Seventy coats of arms of Yorkist or Lancastrian knights and noblemen – all hand-painted by volunteers at Barnet Museum – are hanging from lamp standards all the way from High Barnet tube station to Hadley Green.

Almost twice the number of medieval re-enactors, in full armour, livery and costume, are due to attend this year’s festival, which is again being held at the Byng Road playing fields.

Each day there will be a re-enactment, complete with mock cannon fire, of the Battle of Barnet (1471) and the earlier second Battle of St Albans (1461).

Last year’s festival, which attracted six thousand visitors over the two days, was funded through a Heritage Lottery Fund grant to the Battle of Barnet Project.

Such was its success that the organisers have established a charity – the Barnet Medieval Festival Committee – to raise the funds needed to continue the festival.

Entry will again be free for children, but there will be a £2 admission charge for adults to help defray the costs.

In addition to the battle re-enactments, there will be a host of other attractions, including living history displays and medieval music, have-a-go archery, a medieval market with 25 stalls (twice as many as last year), community exhibits and stands for food and drink.

One of the highlights will be the unveiling of a large oil painting of the Battle of Barnet by Graham Turner, a leading medieval artist, who has been working on the project for some months.

Mr Turner says his aim is to represent on canvas one of the “pivotal battles of the Wars of Roses, the Battle of Barnet, fought on a foggy Easter Sunday, 14 April 1471”.

The moment he wants to capture is the struggle at the height of battle, when men were fighting for their lives and being cut down in the brutality of medieval warfare.

“Central to the composition is Edward, wearing the Royal arms on his tabard and a crown on his head, his banner and personal standard flying behind him.

“He is in the thick of the fighting, about to strike down one of Warwick’s bill men, while others jostle for position to strike at their enemies, trying not to stumble over their fallen comrades.”

Susan Skedd, co-ordinator of the festival, hopes the unveiling of the painting – and its graphic depiction of the battle – will be another memorable moment in the efforts to build up public interest in Barnet’s role in the Wars of the Roses and help attract visitors to the town.

She said the final go-ahead to continue the Medieval Festival this year was thanks to significant donations from individuals and organisations, including the Battlefields Society.

“We have had fantastic support from medieval re-enactors who so enjoyed the festival last year and are determined to make it a success this year.

“The medieval banners the length of the High Street are a stunning sight and we hope will help build up interest and provide a real welcome to visitors.

“We were delighted that so many people walked to the festival site last year and we would like to encourage festival goers to leave their cars at home as parking is very limited at the Barnet Elizabethans’ playing fields in Byng Road.”