Putting the Battle of Barnet on the map for historical tours 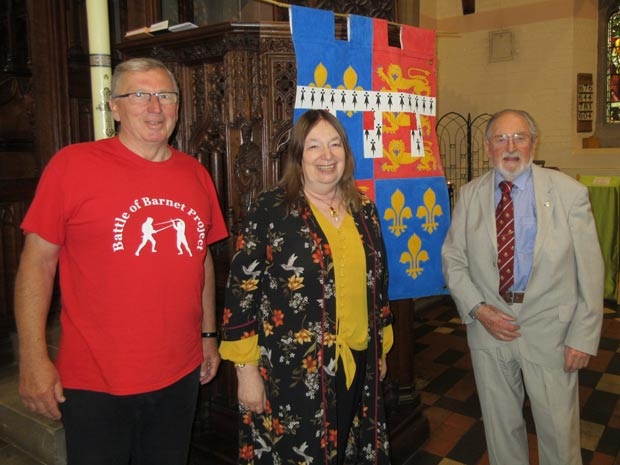 Alison Weir with the chairman of Barnet Museum, Mike Jordan (right), and Dennis Bird, talks organiser for the Battle of Barnet Project
A heartfelt plea for the creation of a visitors’ centre or historic trail to mark the site of the 1471 Battle of Barnet was made by the celebrated author and historian Alison Weir after she gave a lecture on Richard III: Man or Myth, at Barnet Parish Church.

Ms Weir praised local efforts to promote Barnet’s historic role in the Wars of the Roses and she gave her full support to plans to repeat this summer’s re-enactment of the battle with an annual Barnet Medieval Festival.

She told the Barnet Society of the frustration felt by historians, who give lecture tours, when they find there is nowhere locally they can stop to give an interpretation of what happened in the grisly confrontation between the Lancastrian and Yorkist armies in fields to the north of the obelisk that commemorates the Battle of Barnet.

“It would be an amazing achievement if all the efforts to promote and celebrate the battle do produce a lasting attraction.

“Unfortunately, at the moment, we just pass Barnet by when we head out of London for tour visits to the sites of the Battle of Tewkesbury or the Battle of Bosworth, and it is such a shame.”

She hoped that one day there might be a visitors’ centre at Barnet, such as at Bosworth, or an historic trail, as at Tewkesbury, where historians could give their interpretations of the importance of Barnet as a battlefield site and the role played in the conflict by the young Richard III, then the 19-year-old Duke of Gloucester.

She had been so encouraged to hear news of the recent archaeological survey of the Battle of Barnet site and the plans to turn this summer’s Barnet medieval festival into an annual event.

Interest in Richard III had increased greatly since the discovery of his remains in a Leicester car park and there was even greater focus now on his possible role in the death in sinister circumstances of the two young princes, the boy King Edward V and his younger brother, Richard, Duke of York.

“This is one of the most fascinating murder mysteries in English history and finding Richard III’s remains has captured the public’s imagination. Everyone likes conspiracy theories, and this is one that has been debated for 500 years and will go and on being discussed.”

Ms Weir’s visit coincided with the launch of a crowd funding appeal to raise £35,000 to finance next year’s re-enactment of the battle – over the weekend, June 8-9, 2019 – and to run the Barnet medieval festival as an annual event.

The aim is to re-establish Chipping Barnet’s identity as an historic market town by reconnecting to its medieval past with a sustainable annual community festival.

Pledges of support can be made via https://www.spacehive.com/making-barnet-a-festival-town?searchText=barnet

Another crowdfunding campaign for £60,000 – also part of the Mayor of London’s annual crowdfunding appeal – has been launched by Barnet Borough Arts Council for the cost of commissioning and erecting a two-metre high brass sculpture, Pyrrhic Victory, by Barnet sculptor John Somerville.

Pyrrhic Victory, already created in model form as a maquette, depicts a knight on horseback worn down by exhaustion leaving the Battle of Barnet battlefield, and it was inspired by the words of the Duke of Wellington – “Believe me nothing except a battle lost can be half so melancholy as a battle won”.

Barnet Arts aims to install the monument on a plinth in open space in public gardens in Whetstone High Road.

“This is not intended to be a war memorial, nor a memorial to the Battle of Barnet, but a space for local people to peacefully enjoy an evocative piece of art and learn about local history.”

More details and pledges for the Battle of Barnet monument and garden via www.spacehive.com/battleofbarnetmemorial or This email address is being protected from spambots. You need JavaScript enabled to view it.

If funds can be raised, Pyrrhic Victory, a two-metre high brass sculpture, will be installed in public gardens in Whetstone High Road

More in this category: « Sketch for new Battle of Barnet oil painting London Buses: Typical - two consultations come along at once »
back to top