Signatures by the hundred in support of junior doctors 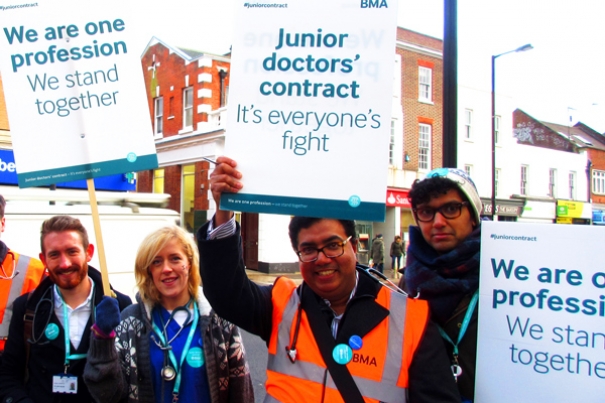 Junior doctors Emily Vaughan and Rithesh Veettil rallying support outside the Spires shopping centre
Junior doctors from Barnet Hospital spent their strike day collecting signatures in support of the British Medical Association’s petition to the Prime Minister urging the government to agree a contract that is “fair for doctors, safe for patients and provides a future for the NHS”.

Outside the Spires shopping centre, passers-by were signing up in support at the rate of 200 an hour in response to appeals from a group of six junior doctors, each carrying a placard.

Several still had stethoscopes round their neck as they had left night shifts and early-morning duty to join the picket. Toots of support from passing motorists in the High Street helped give the Spires’ protest added momentum.

Around 200 junior doctors are employed at Barnet Hospital, and they mounted pickets at the hospital entrance, the Spires, and the approach to High Barnet tube station in support of the BMA’s day of strike action at hospitals in England (12.1.2016).

Leading the picket at the Spires was senior registrar Rithesh Veettil, who specialises in acute medicine, and is hoping to become a consultant. In his six years as a junior doctor, he had experienced at first hand the mounting pressures on his colleagues.

“I already do lots of night shifts and weekends on the acute wards at Barnet, and I can’t do any more without sacrificing standards of care and safety.

“All the acute services are already in operation at Barnet at weekends, and what the government is trying to do is stretch the same resources even further without any additional support.”

Mr Veettil estimated that in his time as a junior doctor 20 per cent of those he had worked with had left the NHS and gone overseas to work.

Emily Vaughan, a newly qualified junior doctor, started at Barnet Hospital in August last year, and she was convinced she could not work any more hours and still have a normal life.

"I have only been at Barnet for a few months and I know that we are all working at our maximum. When I was on call on the surgery wards, I was sometimes doing a 91-hour week, of 13 to 14 hours a day.

“I am now in elderly care, and what we need is more capacity for taking scans at weekends. Essential scans are available, but not as many as we would like. We also need far better funding for social care, so elderly patients can be moved on from hospital.

“I really like working at Barnet. It’s a small hospital, but everyone knows one another, and the care is good, but if we are stretched any further without increasing the workforce, standards of care will go down, and patient safety will be at risk.”