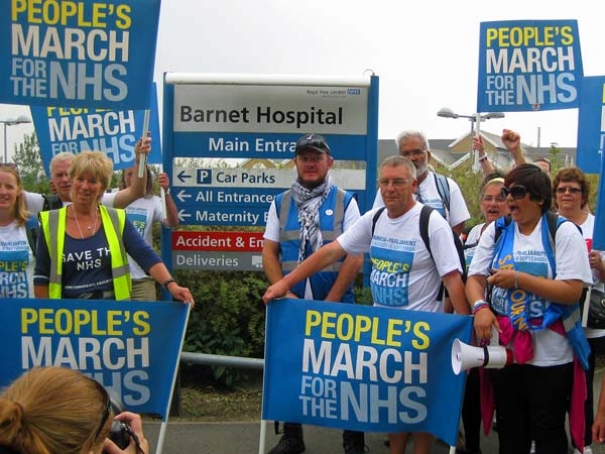 Marchers outside Barnet Hospital
Chants of “Our NHS, your NHS” echoed around the Wellhouse Lane entrance to Barnet Hospital as the People’s March for the NHS passed through Barnet on its way to Edmonton.

The marchers were following the route of the Jarrow March of 1936 and heading for their final stop in North London before a rally in Trafalgar Square the following day.

The 207 marchers on the Jarrow Crusade walked the 280 miles to Marble Arch over twenty-two days, a feat those on the People’s March for the NHS were determined to replicate as part of their campaign to prevent what they fear is becoming the “rapid dismantling, privatisation and destruction” of the health service.

They set off from Jarrow on 16 August and there were around 100 marchers, many wearing “Save the NHS” Tee shirts, and with banners held high, when they reached Wood Street from Galley Lane and headed into Barnet, stopping off for a photo call at the Wellhouse Lane entrance to the hospital. (5.9.2014)

Their route from St Albans to Edmonton was eighteen miles long, compared with the eleven miles for the Jarrow Marchers who went on more a direct route via Edgware.

A lengthy diversion was required because of the M25 motorway and also due to the fact that in places the main roads between St Albans and Barnet were considered too dangerous, so instead the NHS march went via London Colney, Shenleybury and Borehamwood and then across the A1 footbridge into Galley Lane. 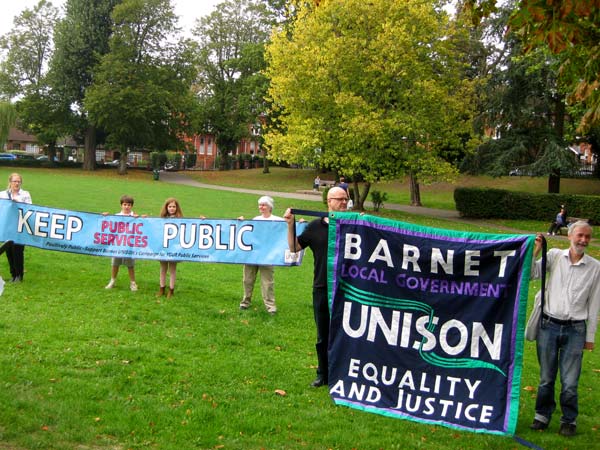 Members of the Barnet Unison branch formed a welcoming committee at Ravenscroft Park and had hoped the marchers would be able to stop for a lunchtime picnic, but time was pressing and together with other local sympathisers they continued on their way along Wood Street towards Edmonton.

The marchers said they knew all about the changes to Barnet Hospital because of hospital reorganisation in North London and they were concerned at the likely impact of the government’s decision to impose an open market on the NHS.

“We don’t want to see private companies operating in the NHS under the heading of ‘efficiency’ when we know they are accountable to their shareholders, who are only interested in maximum profit before patient healthcare.”