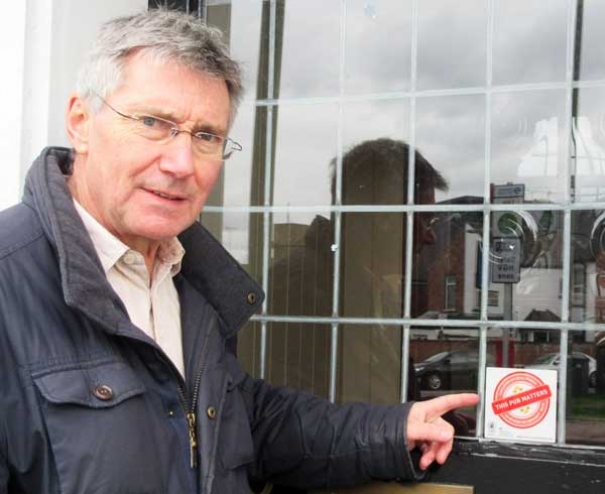 CAMRA’s David Fenton pointing to the forlorn sign “This pub matters” – the only remaining reminder of what was once the White Lion public house
Another of Barnet’s historic public houses, the White Lion in St Albans Road, has closed, and local residents fear that it might be converted into flats or even demolished to make way for a new housing development.

Fuller’s brewery told the Barnet Society that the property has been purchased by “a local business man”, but the company could give no further information about the purchaser, nor could it comment on the likely implications of the sale.

The White Lion served its last customers on Sunday 12 March. Many of the pub’s regulars had met the previous evening for a farewell round of drinks.

Pubs were once part of Barnet’s rich history as an old coaching town, but there have been numerous closures in recent years, the most recent being the loss last year of the Old Red Lion at the bottom of Barnet Hill, which is being replaced by a group of six houses. 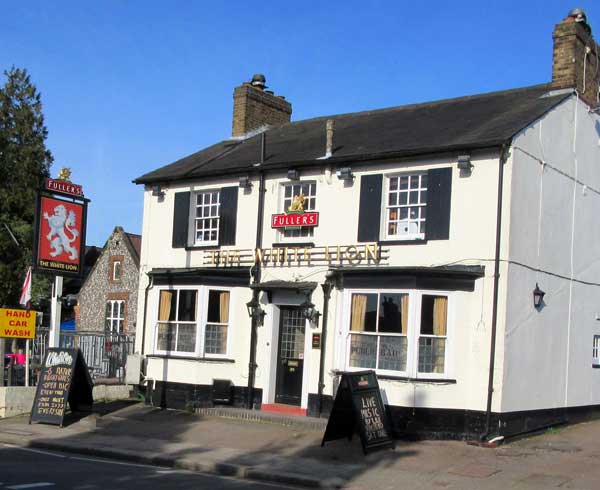 David Fenton, pub protection officer of the Enfield and Barnet branch of the Campaign for Real Ale, told the Barnet Society that his organisation deplored the loss of yet another landmark pub.

“In the last two decades we have now lost not far short of a dozen pubs within a mile of Barnet parish church as the brewers seek to maximise profits.

“They fail to recognise the social value of public houses, and so often when CAMRA fights to get them listed as an asset of community value, the brewers’ lawyers take us on and succeed in persuading Barnet Council to strip away even that limited protection.”

When concern about the future of the White Lion first arose in 2015, and the pub was placed under temporary management, CAMRA succeeded in October that year in persuading Barnet Council to list it as an asset of community value.

However, after representations from Fuller’s lawyers, that decision was reversed in September 2016 when the council concluded that the White Lion had been “incorrectly listed because the local CAMRA branch did not provide evidence to satisfy a mandatory local connection”.

The White Lion opened in 1826, and was on the route of what was then Telford’s famous road from London to Holyhead. Since 1986 it has been listed by Barnet Council as being a building of local architectural or historic significance.

Although such local listing does not afford the statutory protection afforded by national recognition, the council’s planning officers would take this into consideration if there was any work that had an impact on its external appearance.

If there was an application to demolish the White Lion, set against this would be its placing on the local list and the fact that the council’s intention is to “preserve and enhance these historic buildings wherever possible” and to do what it can to “retain locally listed buildings”.

While CAMRA acknowledged the importance of listing the building itself, it remained highly critical of Barnet Council’s attitude towards recognising threatened public houses as assets of community value.

Mr Fenton said that when CAMRA’s attempted to get the Old Red Lion declared an asset of community value they were told their application was two weeks too late, and they had been equally frustrated over their attempts to get a degree of protection for the Sebright Arms in Alston Road. 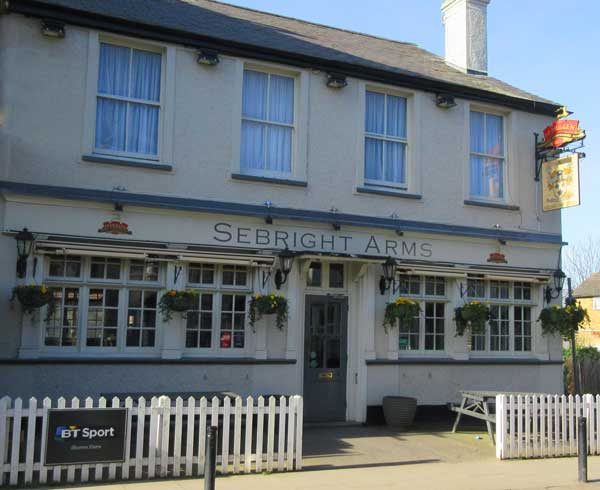 At CAMRA’s instigation, the Sebright Arms was listed as an asset of community value in March 2016, but that was overturned the following July after an intervention by McMullen’s lawyers and the council determined that CAMRA did not meet the test for having a local connection.

After CAMRA’s rebuff, 36 local residents formed the Sebright Arms Community Group and their application was approved in January this year, although there are fears that McMullen’s lawyers might again seek to challenge the decision.

The Sebright Arms is one of only three pubs within the vicinity to have community asset status, the other two being the Griffin in Whetsone and the Bohemia in North Finchley, and Mr Fenton said CAMRA would go on fighting to safeguard these listings.

We do have a fight on our hands as the brewers realise the value of these properties in terms of redevelopment for housing, and their lawyers are always on the case.

“We do have a fight on our hands as the brewers realise the value of these properties in terms of redevelopment for housing, and their lawyers are always on the case.”

The pubs in and around High Barnet that have closed in the last two decades, include the Two Brewers, Old Windmill, Crown and Anchor, King William IV, Green Man, Albion, After Hours, Alexandra, and Old Red Lion.

When Mr Fenton visited the White Lion five days after its closure, all signage had been removed and the only grim reminder of the campaign to keep it open was one of CAMRA’s original signs saying “This pub matters.”

“It has been terrible to see the slow decline of the White Lion under temporary management. One day there was even a sign in one of the windows that said: ‘Customers Wanted: Apply Within’ – CAMRA could not have put it any better.”