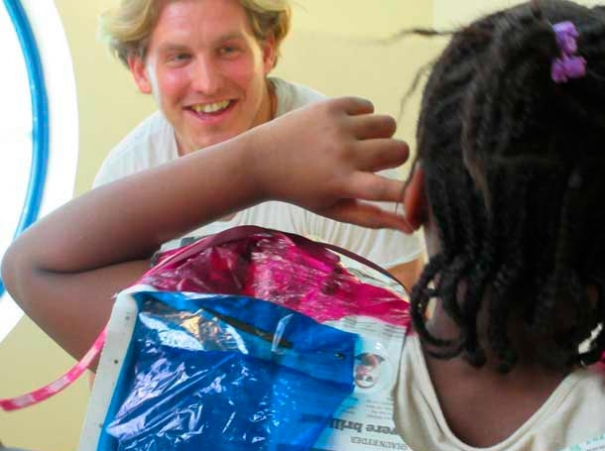 Chris Robertson, healthy living instructor, organised a fashion parade at the High Barnet hub for young carers
A two-hour session of play and activities once a month at the Sense Touch Base, just off Barnet High Street, is a lifeline for children who are often isolated at home caring for sick or disabled parents.

After being grounded for several months because of a lack of transport, six children aged seven to eleven enjoyed a fun Saturday afternoon, staging a mini fashion show and then making pancakes decorated with pieces of fruit.

Children who look after family members, such as a single parent, are often invisible to local authorities.

They sometimes miss school, and can find it difficult to make friends as they are rarely free for social events.

Barnet Carers Centre, the charity that works with Barnet Council to provide support for adult and young carers across the borough, has recently secured funding for a bus to pick up and collect the children for monthly Saturday sessions for 7-11 year olds, and a Friday evening get-together for those aged 12 and over.

“What is so rewarding for the play team is that these children are very supportive of each other once they are in a nurturing environment,” says Tom Walters, play leader for the charity’s High Barnet hub.

At school, they feel different from other children because they are so isolated at home caring for a sick or disabled parent.

“At school, they feel different from other children because they are so isolated at home caring for a sick or disabled parent. They spend so much time having to do grown up things, but with us they can enjoy themselves.”

Barnet Carers offers support to over 600 young carers within the borough, but surveys suggest there could be as many as 4,000 under the age of 18 caring for a family member or relative.

Activities for the six children at the most recent Saturday session were organised by instructor Chris Robertson.

First, they were dressed for a fashion shoot in costumes cut out from newspapers by play worker Kezia Smith and then, after holding a cat walk, another play worker, Millie Henshaw-Devall helped the children cook pancakes decorated with pieces of fruit.

Ms Smith said she enjoyed seeing the children respond. The team knew they were often very isolated at home, perhaps having to care for parents with not just physical but perhaps mental health issues, such as addiction.

“When you see children from that kind of environment enjoying being kids once again, it does give you a real buzz, especially as they seem to know they share the same kind of problems, and that makes them so supportive of each other.”

Barnet Carers Centre, which opened its doors in 1996, is based at Global House, Ballards Lane, North Finchley.

It is in contact with 5,500 adult carers across the borough, but the 2011 census identified 32,320 adult carers within the local authority area.

Unpaid carers registered with the centre can apply for a carers’ discount card which is accepted by an increasing number of local businesses, including the Barnet Everyman cinema and High Street business such as chemist Wilkinson, Visible Changes hair salon, mobile and pc repairer Crazy Connection, optician Gary Swerner, and Honey Bee and Painted Pot cafes.

For further information about volunteering or donating see www.barnetcarers.org