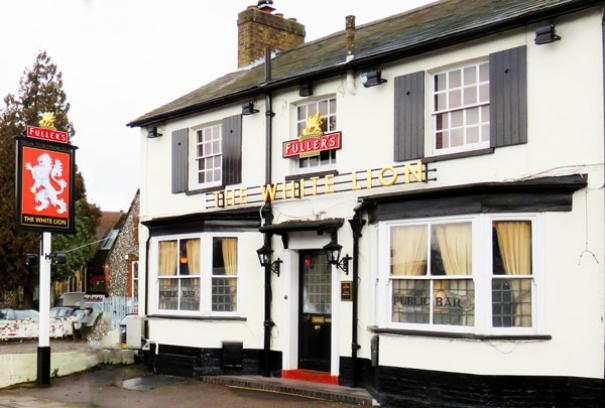 The White Lion, St Alban's Road
Renewed uncertainty about the future of the White Lion on St Albans Road has led to a successful bid to persuade Barnet Council to declare that the pub is a community asset of value to local residents.

The Campaign for Real Ale stepped in and made a formal application because Fuller’s Brewery is continuing to advertise the tenancy of the White Lion, which is currently under temporary management.

Community asset status gives interested groups a six-month opportunity to raise the money to purchase a building that is used by a local community should the owner wish to dispose of the property.

CAMRA tried unsuccessfully earlier this year to persuade Barnet Council to approve a community asset declaration for the Old Red Lion at the bottom of Barnet Hill after it was sold for housing redevelopment by the Hertford brewers McMullen and Sons Ltd.

David Fenton, pub protection officer for CAMRA’s Enfield and Barnet branch, told the Barnet Society that it considered the White Lion was the pub most in need of protection because of the risk of closure and being sold for redevelopment.

“We lost our application to get community asset status for the Old Red Lion at Underhill on the grounds that when we applied it was no longer a pub.

This was unfair because McMullen closed the pub within two weeks of it being sold to developers.

“As we fear we may lose other pubs in the Barnet area, we drew up a shortlist of pubs we thought were at risk, and the White Lion was top of our list. We intend to submit further applications when time allows.”

Fuller’s Brewery told the Barnet Society in February that it had no plans to dispose of the White Lion. The tenancy was being advertised and the company believed the pub had a viable future.

The White Lion’s temporary manager is employed by a company that currently has a six-month tenancy, and has first refusal for a new tenancy if the pub is judged to have a profitable long-term future.

“We’ll decide after Christmas whether or not to sign a lease for perhaps three or four years, but that will probably depend on whether an agreement can be reached on refurbishing the pub’s kitchen.

“It needs new ducting, and other improvements are necessary in order to bring it up to standard, but without a usable kitchen, and the chance to offer food, a pub stands little chance today of succeeding.”

The temporary tenants say they understand why some customers are concerned, and why CAMRA had decided to step in. “Fuller’s are continuing to advertise the tenancy, and the rent is quite high, which means the pub has to maximise sales, and that requires investment in a new kitchen.

As far as we are concerned there is no uncertainty, and we would like to stay long-term, but nothing is definite.

Councillor David Longstaff told the Barnet Society that Barnet Council’s community leadership committee had approved the application to list the White Lion as an asset of community value.

“Several buildings have been listed in the borough before, but this is the first in the High Barnet ward.

Basically community asset status gives local groups six months to find the money, or a suitable organisation that could purchase the property at the market rate, should the owner wish to dispose of it.”