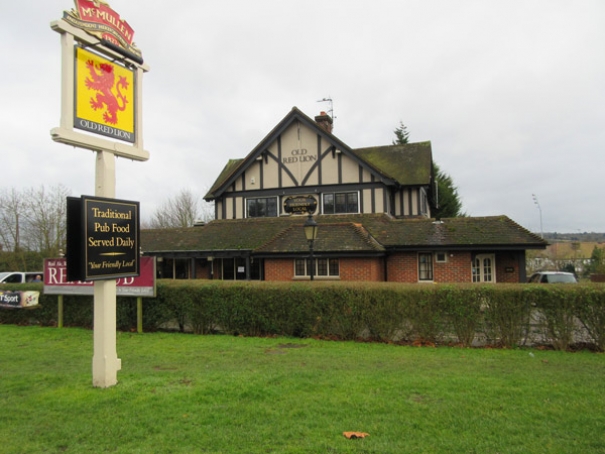 The Old Red Lion
Barnet Council is being urged by the Campaign for Real Ale to prevent the demolition of the Old Red Lion public house, at the bottom of Barnet Hill, by declaring it a community asset for the use of local residents.

CAMRA’s application, which is under consideration by the council’s community leadership committee, has the backing of former customers who believe the pub, one of the oldest in the town, could be used as a venue for local events.

The Hertford brewers, McMullen and Sons Ltd, closed the Old Red Lion in February and have sold the building for housing development.

Peter Furness-Smith, McMullen’s managing director, told the Barnet Society that it had been sold “unconditionally for redevelopment” for an undisclosed sum. The proceeds would be used to fund the refurbishment of the company’s other pubs.

If the Old Red Lion was to be declared a community asset it could delay the redevelopment. But if it was preserved and reopened as a community asset – and managed by the local community – Barnet Council would have to offer financial help, action not taken following other recent pub closures.

Losing the Old Red Lion, which had been serving McMullen beers since 1890, has been regarded as terrible blow to the community spirit of Underhill, and its closure follows the departure of Barnet Football Club, which played its last game at the Underhill stadium in April 2013, following its move to the Hive stadium in Camrose Avenue, Edgware.

Regulars are upset at the loss of their meeting place.

So far no planning application has been registered with Barnet Council and there has been no word on either the identity of the developers or whether they plan to demolish the pub for new housing or convert it into apartments.

A former customer of the Old Red Lion, Simon Smith, who has backed CAMRA’s bid to get the pub declared a community asset, said he was concerned that the council’s community leadership committee appeared to have rejected the application before a case had been made out.

He acknowledged there would be financial implications for the council if the developers were to challenge a move to protect the pub by giving it community asset protection.

But he believed the local community would rally round, and he for one was prepared to organise fund-raising events to contribute to its future financial viability.

Former customers rejected the grounds on which McMullen had closed the pub. It had been there for over 100 years and was an integral part of the local community.

“McMullen could have made much more of the community hub aspect of the pub and promoted it for local events. It has an excellent location and many successful restaurants and pubs open in the area all the time,” said Mr Smith.

“Regulars are upset at the loss of their meeting place. All lived close by and found real comfort and camaraderie in the Old Red Lion and always received a warm welcome from the staff.”