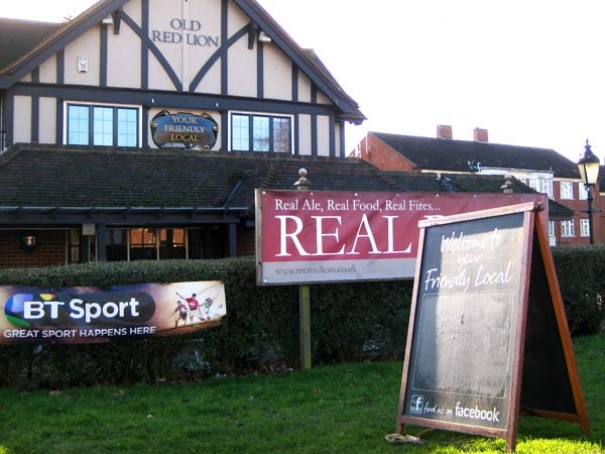 The Old Red Lion public house is to close
Another of High Barnet’s oldest public houses is to close – the Old Red Lion, at the bottom of Barnet Hill, is to serve its last pint on Saturday 28 February, following its sale by the Hertford brewers McMullen and Sons Ltd for housing development.

But rumours that the same fate awaits the White Lion in St Albans Road have been officially denied by Fuller’s Brewery, which says it sees a viable future for its long-established public house despite the fact that it is advertising for a new publican.

The loss of the Old Red Lion will be a blow to the community spirit of Underhill as its follows the departure of Barnet Football Club, which played its last game at the Underhill stadium in April 2013, following its move to the Hive stadium in Camrose Avenue, Edgware.

The Old Red Lion, which has been serving McMullen beers since 1890, was originally owned by the football club, which sold the property to the brewery for £3,200 in 1957.

Peter Furness-Smith, McMullen’s managing director, said an offer “for an undisclosed sum” had been accepted for the building because the number of customers had “declined significantly” since the closure of the football ground.

Despite being extremely well run, the pub had not been successful in attracting more local residents.

We have sold the building unconditionally for redevelopment.

“We have sold the building unconditionally for redevelopment. We never like selling or closing pubs but we intend to use the proceeds of the sale to fund ongoing refurbishment of our existing estate of 140 pubs as well as to fund new acquisitions.”

Lorraine West, the manager of the Old Red Lion, told the Barnet Society that the pub’s closure was a sad moment for her and her staff of four. “But the company are looking after us.”

McMullen hope that customers will switch to its other nearby public house the Queens Arms, next to Barnet Odeon.

There have been rumours for some weeks that the White Lion pub was threatened with closure, and that the site in St Albans Road might be sold off for housing. 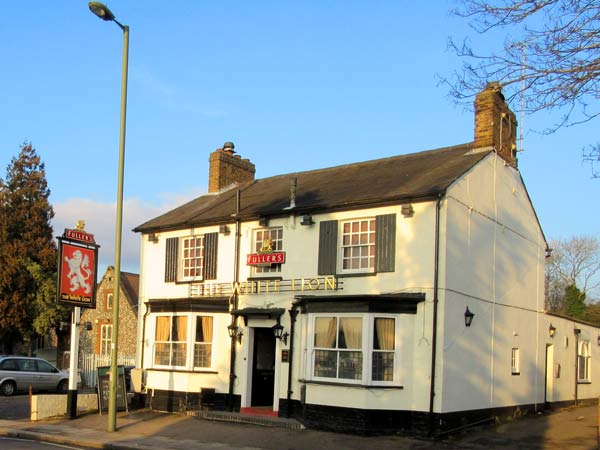 This speculation was denied by Fuller’s Brewery. It confirmed that the publicans for the last four years have just left, and that the company is advertising for a new landlord, but at a higher rent, which some loyal customers claim is unlikely to improve the pub’s viability.

Regulars fear that if the pub is considered no longer viable and has to close, Fuller’s will be able to claim that redevelopment is the only alternative. Behind the building is a big yard, and the site as a whole could accommodate a large number of houses or flats, which would be highly profitable.

In a statement to the Barnet Society, Fuller’s Brewery said the company had no plans to close the White Lion. “Whenever there is a change of tenancy we get rumours like this but we are not proposing to close the pub and we believe it has a viable future.”

Robin Bishop, chair of the Society’s planning and environment group, says the White Lion offers more than a pleasant, traditional ambience for drinking real ale – though that’s not a bad reason to preserve it!

It is one of Chipping Barnet's dwindling number of former coaching inns – complete with former stable-yard – which were, along with Barnet Market, fundamental to our town’s existence.

It was probably built soon after the construction of the St.Alban’s Road by Thomas Telford in 1826, in the expectation of profits from the (then major) coaching trade.

The pub itself has some protection because it is on Barnet’s list of buildings of local significance. However, neither it nor Christ Church is within the Monken Hadley Conservation Area – surprisingly, because they abut the Conservation Area boundary and are attractive parts of the street scene for travellers arriving at, or departing from, Chipping Barnet.

The Barnet Society is discussing with council planners the possibility of extending the Conservation Area, which would give the pub further protection.

Do you care about the future of the White Lion as a drinking establishment? Or do you support retention of the building, but converted to another use such as housing?