One of the banners painted by volunteers at Barnet Museum (from left to right) Margaret Luck, Hilary Harrison and Mike Jordan, chairman of the museum’s trustees
Replica copies of four of the heraldic banners of the dukes, earls and knights who fought in the 1471 Battle of Barnet are now on display in the Spires shopping centre.

Banners will be hung the length of the High Street to help celebrate the Barnet Medieval Festival to be held over the weekend of June 9-10. 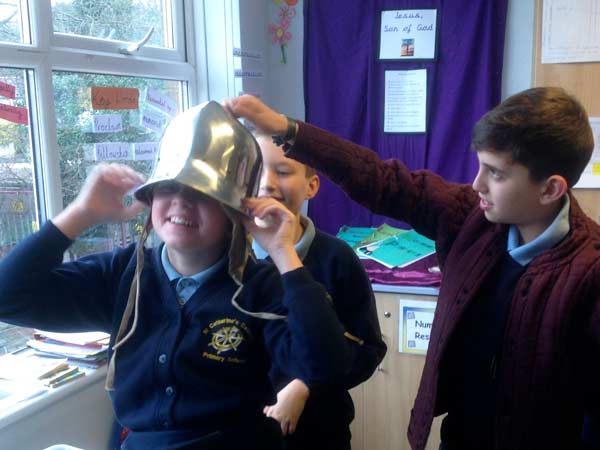 They are being painted by volunteers at Barnet Museum, just one of the activities being organised by the Battle of Barnet Project.

Local children are being encouraged to take part, able to inspect replica items from the battle, and to try on armour, from a school loan box that will be circulated.

The contents of the box, including replicas, artifacts and costumes, have been out on trial visits – creating considerable interest at St Catherine’s School where pupils had the chance to try on a replica breastplate and helmet.

To coincide with the anniversary of the battle – 14 April 1471 – the medieval military artist Graham Turner is to give a talk about paintings of the Battle of Barnet and the Wars of the Roses at the Pennefather Hall, Christ Church, St Albans Road from 1pm on Saturday 14 April 2018.  Click here for details

So far twelve banners from the battle have been painted by volunteers at the museum.

The four banners on display at the Spires are those (from left to right) of George, Duke of Clarence (brother of Edward IV and Richard, Duke of Gloucester, later Richard III) who fought for the Yorkists; Sir Roger Kynaston, who fought for the Yorkists; Earl of Warwick, “Warwick the Kingmaker”, who led a Lancastrian army and was killed at the Battle of Barnet; and the Earl of Hastings, a Yorkist commander at the battle.

Re-enactments of scenes from the battle by members of the Medieval Siege Society will be staged over two days when the Barnet Medieval Festival is being held over the weekend of June 9 and 10 at the Byng Road playing fields.

The re-enactors will demonstrate medieval life and fighting techniques, including men-at-arms and hand-gun demonstrations, as well as providing a living history camp.

Other medieval-related activities will include food-tasting, stalls and children’s craft.