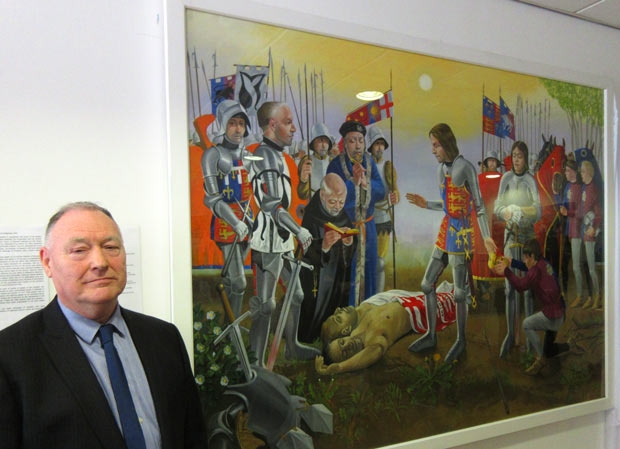 Another depiction of the Battle of Barnet – by the medieval artist Graham Turner – is to be unveiled at the Barnet Medieval Festival to be held at the Byng Road playing fields over the weekend of June 8 and 9.

The two paintings – and the Wars of the Rose heraldic banners that currently decorate the length of Barnet High Street – are just some of the spin-offs from the Battle of Barnet project which was supported by Heritage Lottery Fund and which has been working to promote interest in Barnet’s role in the Wars of the Roses.

An earlier painting of the Battle, by Agnes Allen, has been on display at Barnet Museum for some years.

Mr West’s painting, which was partly financed by the Barnet Guild of Artists, and which he is donating to Barnet Museum, will remain on show at the Spires until arrangements are made to find a permanent display space.

After the unveiling of the painting by Martin Russell, the Deputy Lieutenant for the London Borough of Barnet, Mr West said it had taken him ten weeks to paint – and he had never before painted such a large canvas in such a short space of time.

Ever since he moved to Barnet 25 years ago, he had been wanting to paint a picture of the Battle of Barnet. 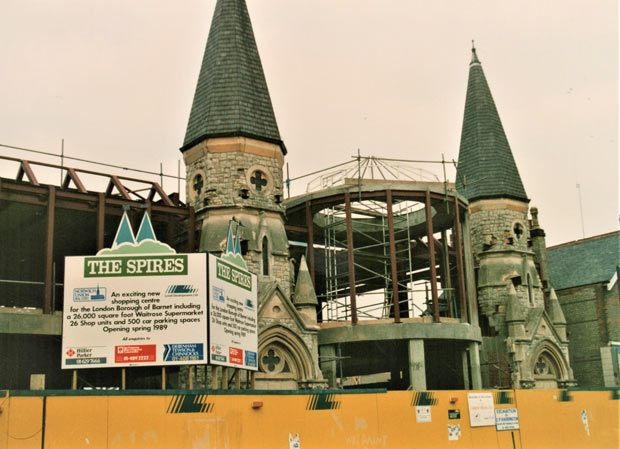 The Spires under construction 30 years agoPart of his inspiration had been the advice had received on armoury and heraldry from the historian Geoffrey Wheeler who had researched the Wars of the Roses coats of arms on the 70 banners that have been hung in the High Street.

Mr West’s painting depicts the victorious King Edward IV being presented with proof of the death during the battle of both Warwick the Kingmaker (Richard Neville) and his brother Lord Montagu.

“The painting might be considered to glorify death, but that is not the intention. Death is a consequence of warfare, so the painting is less a celebration of war, but rather the case of Warwick’s fate being the price of treachery.”

Mr West drew attention to other features of the painting: A Dominican priest is seen offering prayers to the fallen Neville brothers; Edward would have seen that his crown was secure; fallen branches represent the soldiers who fell in the battle; a bush of dog roses was for the Yorkists; and Edward, a ferocious commander, stood on dandelions.

Mr West, an art lecturer for many years, was a former head of arts at Camden Institute. Other recent exhibits have included a series of eight paintings, The Passion Suite, which were first displayed at St Albans Cathedral. (see www.apainterkeithwest.co.uk )

Nichola Hunt, chair of the Guild of Artists, said they had been delighted to help finance Mr West’s painting, which was an historically accurate depiction of the climax of the battle.

“Mr West is a keen member of the guild and we hope this painting will be one of a trilogy depicting the victory and the celebrations after the battle.”

In introducing the Deputy Lieutenant, the chair of Barnet Museum, Mike Noronha thanked Mr West for the painting and paid tribute to the Guild of Artists for their support.

He added his thanks the management of the Spires shopping centre for allowing Barnet Museum the use of vacant shop space to display Mr West’s paintings and the museum’s collection of photographs depicting the construction and grand opening of the Spires.

The centre was officially opened by actress Jan Harvey on 27 September 1989 and the 30th anniversary celebrations include its annual charity fund-raising day.

The main event – on Saturday 1 June – was billed as a danceathon, a two-hour alfresco disco taking dancers and visitors back through the last 30 years, dancing to iconic music from the last three decades.