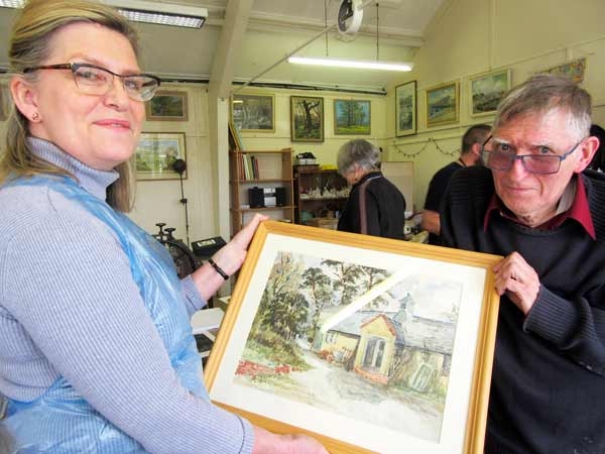 Fred Howett (left) with Nichola Hunt, chair of the Barnet Guild of Artists, admiring a water colour of the Whalebones stable block by the late Miss Gwyneth Cowing who promised that the guild would have the continued use of its studio on the Whalebones estate.
Fred Howett, a long-standing member of the Barnet Guild of Artists, who helped to organise regular and numerous local exhibitions of members’ art work, has died at the age of 74.

In recent years he was closely involved in the ongoing discussions to try to ensure that the Guild keeps its studio – or perhaps secures a replacement building – as part of the proposals to redevelop 11 acres of woods and farmland on the Whalebones estate, between Barnet Hospital and Wood Street.

Mr Howett, treasurer and more recently vice-chair of the guild, often put his own desire to paint in second place to help arrange art exhibitions and assist in negotiations with the Whalebones trustees.

He was born in Bristol, and after leaving Tottenham County School, became an electrical engineer for Standard Telephones.

On retiring, he wanted to dedicate his time to his twin passions of music and art, joining both the artists’ guild and a band with which he played on a weekly basis.

Nichola Hunt, the guild’s chair, said Fred’s IT and organisational skills made him an invaluable member.

“Fred ran the guild with me for the last three and half years, and prior to that with our former chairs, Gillian Griffiths and Clare Drinkwater.

“His input has been invaluable, especially in working with the committee to arrange our regular art exhibitions in the Pennefather Hall, the Old Bull, the Tudor Hall and most recently in helping us lead an ongoing permanent exhibition at the Open Door Centre at Christ Church.”

Ms Hunt praised Mr Howett’s diligent work and support during the long-running negotiations over the future of the guild’s studio at Whalebones following the decision of the trustees of the late Gwyneth Cowing to ask the housebuilder, Hill of Waltham Abbey, to prepare plans for the redevelopment of the estate.

Options for the guild include possibly becoming a charity in order to continue managing the studio at Whalebones; becoming part of a Foundation Trust that would run the property; or perhaps becoming a tenant of a management company that might provide a building for both the guild and the Barnet Beekeepers Association.

Ms Hunt said the guild would miss Fred Howett’s steady hand in helping to “run a smooth ship” but his massive contribution over the years would help ensure that guild continued to have a bright future once decisions had been made on the status of their studio.