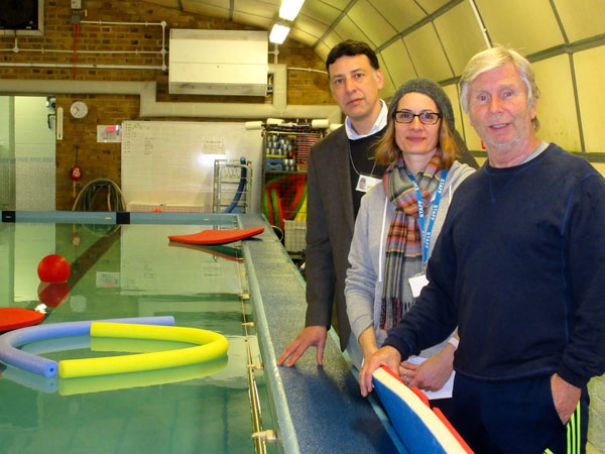 Jim Collis (far right), has helped to teach over 2,000 children to swim in his 20 years at the school. With him are swimming supervisor Josie Snowdon and parent Simon Cohen who is helping with fund raising
Cromer Road Primary School’s swimming pool – where countless hundreds of Barnet children have learned to swim over almost half a century – is in desperate need of repairs, improvements and a new roof.

An appeal to raise the £200,000 to £250,000 needed for a complete refurbishment has been launched by the headteacher, Jude Stone, and fund raising will start with a sponsored swim after the Easter holidays.

Former pupils who have benefited in later life from their school swimming lessons have pledged their support, including the highly-experienced free diving instructor, Adam De La Mare, who intends to produce a video with interviews of children taking part in the sponsored swim.

In a recorded message for morning assembly, Adam described the day he completed his mile swim in the Cromer Road pool.

“I was the slowest in the class, but our swimming day was always my favourite, and that’s where I learned to hold my breath underwater - which is what free diving is all about, swimming around underwater, holding your breath.”

Cromer Road staff and parents say they realise how lucky their primary school is to have its own pool, and they are determined to renew the investment that was made 45 years ago when the pool was opened after a mammoth fund-raising effort.

The pool itself – 12 metres long, five metres wide and a metre deep – is in a fairly good state of repair but the showers, lavatories, pumps and equipment all need to be renewed, and the most-costly challenge of all is to install a replacement for the badly-discoloured plastic roof. 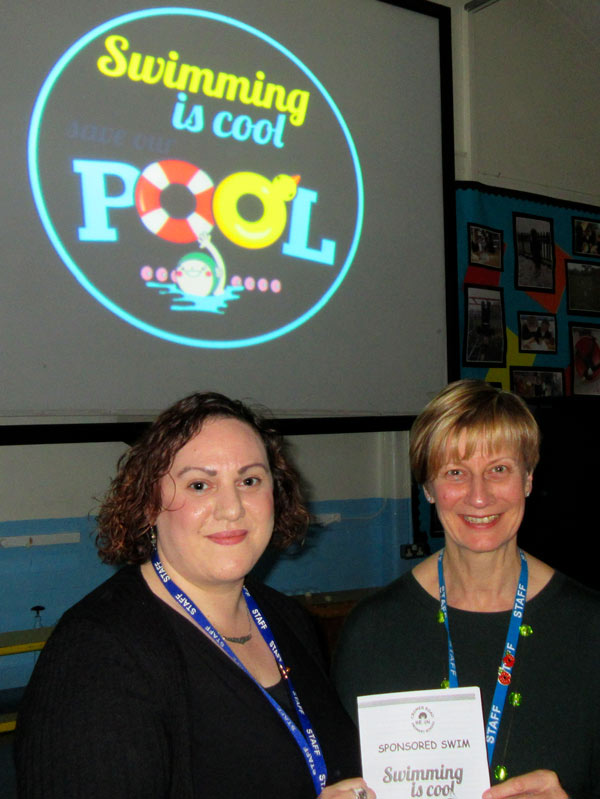 Mrs Stone told morning assembly that a sponsored swim, with pupils each setting themselves a timed target length, would start their “Save Our Pool” appeal.

“We do hope parents, relatives and friends will rally round to sponsor the children so that we can kick off our appeal.

The school’s success rate in teaching children to swim is thanks to the swimming instructor Jim Collis and the swimming supervisor Josie Snowdon.

In the 20 years he has been at Cromer Road, Mr Collis thinks he has probably helped to teach over 2,000 children to swim, and some of his former pupils have gone on to win swimming scholarships and to represent their country.

“Our children know how lucky they are to have a pool on site.

“That’s quite an achievement because they have to swim round the pool 65 times without stopping and it take an hour or more.”

Ms Snowdon said she found teaching children to swim was extremely rewarding. “I like to see the small children progress. To build up their confidence, you have to praise them, and if they have confidence in their teacher, that helps enormously.”

Simon Cohen, one of the parents on the pool committee, has been tasked with trying to help cost the improvements and to work on fund raising.

“We did get £300 from the Aviva insurance group community fund after getting over 3,000 votes for the project, but we have a very long way to go.

“Clearly what we need to do is launch a crowd funding appeal on line and try to get match funding from commercial sponsors.

“We know this is a long-term project, but the improvements are badly needed. Running costs are hideously expensive because the building itself is not energy-efficient. It is cold in winter, and like a greenhouse in summer, so we know we have to make improvements.”