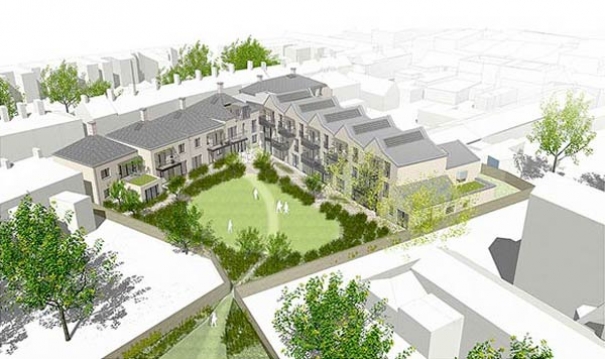 The new complex, on the site of what was previously St Martha’s Convent School, will be one of the first purpose-built co-housing projects of its kind in the country.

Seventeen of the flats will be owner-occupied and the remaining eight for social housing. Their completion in early 2016 will mark the realisation of a long-term plan to create a self-supporting community of women home owners and social renters.

The organisation behind the scheme, Older Women’s Co-Housing of Barnet – or OWCH for short – was formed sixteen years ago. Their housing development in Union Street will be named New Ground, so as to commemorate the ground-breaking nature of the project.

Membership of OWCH is open to women of fifty-plus, and the group was established to help women living alone in old age. Most are retired but some are still working, and they come from a variety of backgrounds and cultures.

The site of the former St Martha’s Convent School was purchased for the group by the Hanover Housing Association three years ago. Planning permission for twenty-five three-, two- and one-bedroom flats was obtained from Barnet Council in April 2013.

Hanover Housing is developing the site. Builders and quantity surveyors are completing final preparations before the former school buildings are demolished and construction starts.

Only one of the properties remains unsold, a two-bedroom first floor-flat for £303,955. The eight social rent flats  – two of which are still available  – will be managed by Housing for Women, which has a partnership role in a joint co-operative established to manage the scheme.

In addition to the block of twenty-five flats to be built around a large garden, there will be a common room, laundry and guest quarters.

Angela Ratcliffe, who is a member of OWCH and also the Hadley Residents Association, said they could not wait to see work start in Union Street.

The site in Barnet was the fourth that the group had tried to acquire. They believed their development was breaking new ground in co-housing and an example of direct action to help tackle old age and loneliness among women and achieve social inclusion.

“It is incredible to look back and realise that our efforts to convert the idea of a self-supporting community of women home-owners and social renters was launched by three people sixteen years ago. 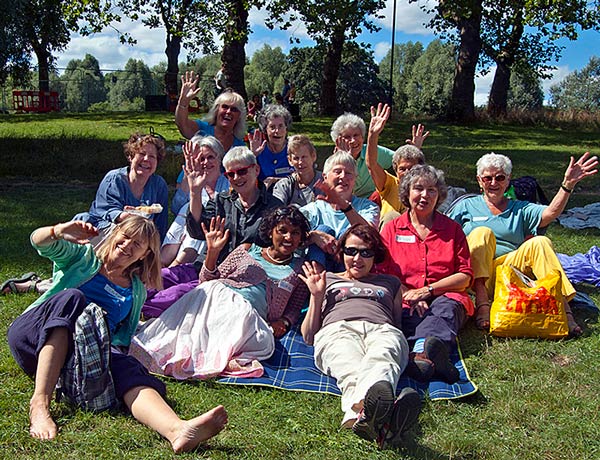 “So you can understand the elation of the moment when we are able to tell the world that we have paid the individual deposits on our flats, the builders have been appointed and we anticipate work on the site with bated breath.”

Maria Brenton, one of OWCH’s founder members, said it had taken three years of persistent work to achieve planning consent for the project.

She led visits to their future neighbours in Union Street to ease the concerns of local residents.

Trying to secure approval for the demolition of a disused school in a Victorian conservation area and replacing it with flats had not been without problems.

“Parking was the subject of local objections to the planning application but, anticipating this, OWCH members have undertaken to relinquish or share cars, and to make the best use of a limited number of on-site parking spaces with no on-street parking allowable.”

Ms Brenton, who plans to move into another co-housing scheme for men and women in Muswell Hill, said OWCH members had gained much useful experience during the last sixteen years.

Parking was the subject of local objections to the planning application

“This is a testing length of time for a group whose oldest members are now in their early eighties, but members have learned resilience above all.

“The group has amassed considerable ‘social capital’ – the key ingredient of co-housing. Although scattered through London and beyond, OWCH members are already a community, participative, hard-working, friendly, helpful to each other and sociable.”

More in this category: « New beginning for former schoolhouse Rare flowers from Totteridge »