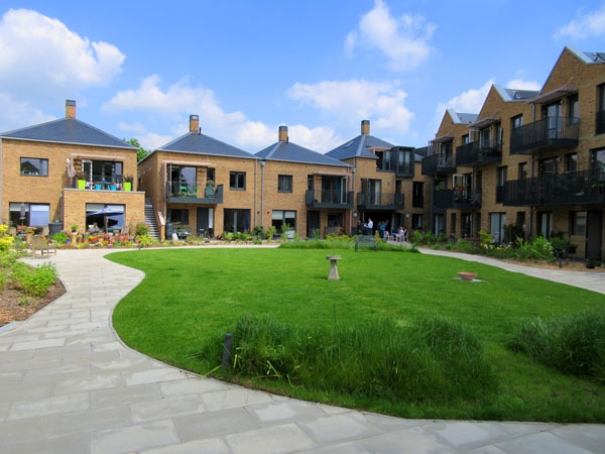 Inner courtyard of New Ground, the women’s co-housing complex in Union Street
An 18-year struggle by a group of “ageing, stubborn but steadfast” women reached its grand finale with glasses of champagne and canapes all round to celebrate the opening in High Barnet of the UK’s first co-housing project for seniors.

New Ground is the name of a group of 25 flats in Union Street which have broken new ground in the delivery of a housing complex for older women providing a mix of privately-owned and rented accommodation.

Shirley Meredeen, the last remaining founder member of Barnet’s Older Women’s Cohousing Community, told guests at the opening ceremony (25.5.2017) that the completion of the complex was a tribute to their perseverance in pursuing their dream to create a space for older women that balanced their needs for privacy with a sense of community.

Guests at the opening included Sister Christina O’Dwyer, headmistress for over 20 years at the former St Martha’s Convent school that had previously occupied the site.

Also present was Theresa Villiers, who as MP for Chipping Barnet, had attended a ceremony in February 2015 to mark the start of construction work after the demolition of the school.

Ms Meredeen recalled the event two years ago when the women – all wearing hard hats and high visibility jackets – were first allowed on to the site.

“Looking back on that day, we know now that we have finally achieved our objective in a hostile, reactionary world, but our doggedness not to give up served us well.

“We are stubborn, but steadfast women, all over 50, and up to the age of 88, who have endured all the setbacks of the last 18 years and can now enjoy our new community.”

“We hope to extend the quality of our lives and reduce our demands for social care. This should be the reality for housing for older people rather than blur into a cloud of helplessness in care homes.”

Ms Meredeen said that she and the late Madeleine Levius, who died in 2005, were inspired to set up OWCH after hearing of the success of cohousing for women from Maria Brenton, who had studied similar projects in Holland and who became consultant for the Union Street scheme.

.... don’t expect us to die soon,
so our advice is set up your own group

Of the 25 flats in the complex, all but seven are owner occupied, and Ms Brenton said the OWCH complex had been designed to encourage the casual interaction that could help transform the lives of elderly people, “especially in an age where passivity in care homes for the elderly is so commonplace”. 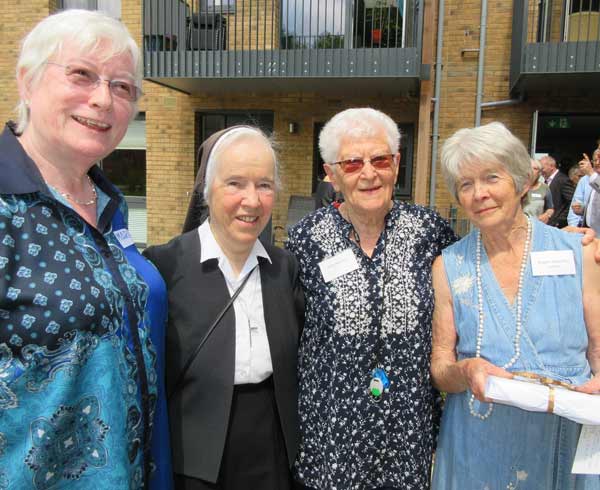 “Stubborn but steadfast” – pioneers of the Older Women’s Cohousing Community celebrate the opening of their Union Street complex. From left to right, Maria Brenton, consultant, Sister Christina O’Dwyer, Shirley Meredeen, founder member, Angela Ratcliffe, convenorThe flats, wheel-chair friendly throughout, are already winning awards and attracting interest from local authorities and care organisations across the country. Older women from Japan are just one of the groups anxious to look at the project.

“So far we have had over 400 inquiries from women who want to get on the waiting list or set up their own scheme. We have run workshops, but we are full up and don’t expect us to die soon, so our advice is set up your own group.”

Angela Ratcliffe, convenor of OWCH, opened the ceremony by apologising for the fact that the opening event was two years later than planned, but the delay had only made the celebration more memorable.

She said OWCH was proud to be continuing Barnet’s great tradition of women helping society. Women had founded numerous charities in Barnet; established Queen Elizabeth’s Girls’ School; and the site of the housing complex was what was once St Martha’s Convent, established in Wood Street in 1914.

She welcomed Sister Christina, the last Sister of St Martha’s to have been headmistress of the school.

Sister Christina started at St Martha’s as a teacher in 1965. She became headmistress in 1985, and continued in that post until 2007.

Sister Christina said she was astonished to see such marvellous accommodation for women replace the school.

“All the sisters in the St Martha’s community are so happy that the convent site is being used as a housing project for women. The transformation is a miracle.”

More in this category: « Barnet’s Wars of the Roses celebration Barnet’s link to the The Crown »