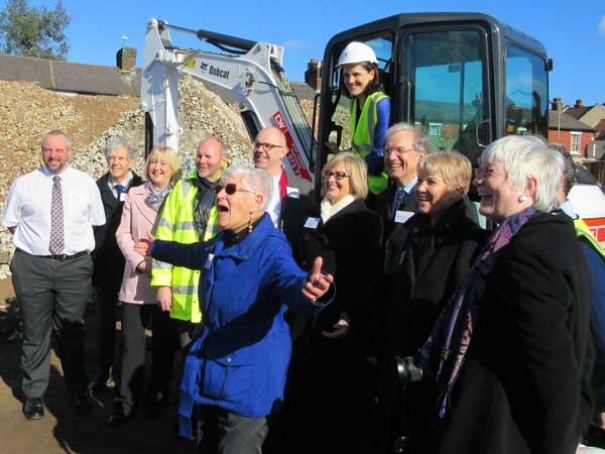 Older Women’s Co-housing of Barnet celebrate the start of construction after a campaign that began in 1998
A group of feisty women, happy to be renowned for their stubbornness, gathered in Union Street, Barnet, for a ceremony marking the start of construction on a unique project – the first purpose-built co-housing scheme of its kind in the country.

A development of twenty-five flats for older women on the site of what was St Martha’s Convent School will be named New Ground, to reflect the ground-breaking importance of an organisation that has the title OWCH – Older Women’s Co-Housing of Barnet.

Alongside heaps of rubble from the demolished school buildings, Mrs Shirley Meredeen, the last surviving founder member, told the assembled women that their dream was about to realised.

After launching their campaign in 1998 to find a suitable site in one of the London boroughs, and then obtain planning approval, building work was finally underway, and at last they could look forward to the day they would be moving into their new flats.

For group photographs to celebrate the occasion, the MP for Chipping Barnet, Theresa Villiers, climbed aboard a mechanical digger to congratulate “some very determined ladies” from her constituency, who had shown great foresight. Membership of OWCH is open to women of 50-plus.

Seventeen of the new flats will be owner-occupied and the remaining eight for social housing; the due date for their completion date is April 2016. The site was purchased for the group in 2011 by the Hanover Housing Association and planning approval obtained from Barnet Council in 2013.

In welcoming members and friends to the ceremony (27.2.2015), Mrs Meredeen thanked the group for their “determination, enthusiasm and stubbornness” in the face of so many difficulties.

“Our housing initiative is a constructive alternative for elderly women facing the loneliness of old age.  We are old women from 50 upwards, but we have campaigned with skill and enthusiasm to live independently together.”

They had demonstrated the collaborative nature of the project by ensuring there would be social housing units for those women who would be renting. Mrs Meredeen paid tribute to Hanover for having taken them on, without realising “what a bunch of feisty women we are”.

She said she hoped the main contractor, Quinn, would deliver a project that was a credit to Barnet.

We want to be part of Barnet; we want to give as well as receive from Barnet.

Mrs Villiers recalled a meeting three years ago with one of the OWCH members, Angela Ratcliffe of the Hadley Residents Association. “She convinced me it would be a great project, despite it being in the middle of a conservation area, and I do pay tribute to you all for persisting with it.

“We will now have some wonderful new homes in Barnet and an opportunity to assist all the residents of this new development to live together and combat loneliness in older people.” 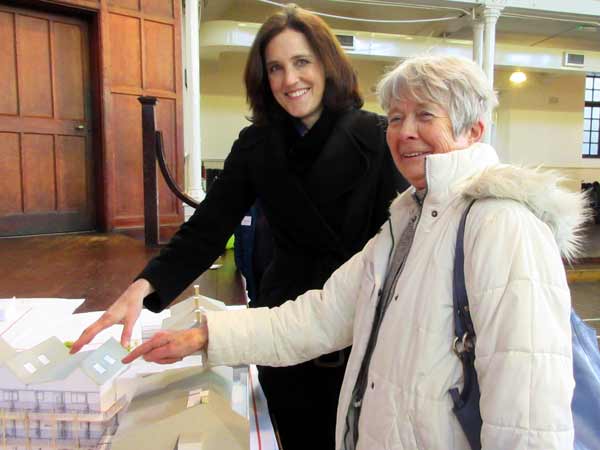 The event brought back memories of the campaign to find a site and then get planning approval. Mrs Ratcliffe recalled the meeting of Barnet Council’s planning committee that finally gave approval.

She remembered being asked by one committee member, Councillor Alison Cornelius, who was also at the ceremony, whether women could remarry and have new husbands living with them on the site.

“I told Councillor Cornelius: ‘You give us planning permission, and we’ll talk about it tomorrow.’ Luckily the plan went through without a hitch. We are not anti-men, men can stay for up to six weeks at a time, but this is a housing scheme for older women.”

Councillor Cornelius said she remembered the exchange very well and she quite understood why there had to be some rules. “I am in full support of this wonderful project, and especially the concept of younger retired women looking after the older women, and then other slightly younger women taking their place.”

Tracy Lavers, executive director of development for Hanover, said the association was doing all it could to develop attractive options to meet the needs of elderly people.