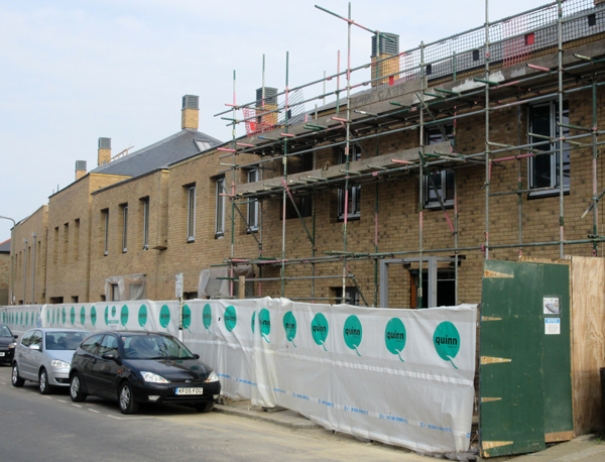 The new development, which was designed to blend in with the Victorian terraced housing at the High Street end of Union Street, is due to be officially opened on Thursday 10 November.

New Ground is the name of the new complex in recognition of its ground-breaking importance in the provision of homes for older women.

Angela Ratcliffe, convenor of what is officially known as OWCH – Older Women’s Co-Housing of Barnet – says the women who backed the project through thick and thin can’t wait to move in.

We are the first senior co-housing community in the UK

“We are the first senior co-housing community in the UK, and we believe we will make a very significant contribution to future thinking and planning for housing for the elderly.

“We have shown it is possible to include both owner occupiers and social renters, and that members of a local community can plan and establish such co-housing projects and then run the scheme for themselves,” said Ms Ratcliffe, a member of the Hadley Residents Association.

OWCH launched its campaign to find a suitable site in one of the London boroughs as long ago as 1998 – and once the group secured the site of what was St Martha’s Convent School, there was the long process of obtaining planning approval, securing a contractor and starting construction.

Seventeen of the flats are for owner-occupation and the remaining eight for social housing. The site was purchased for OWCH by the Hanover Housing Association in 2011, and planning approval was finally obtained from Barnet Council in 2013.