Older women’s housing up for another award 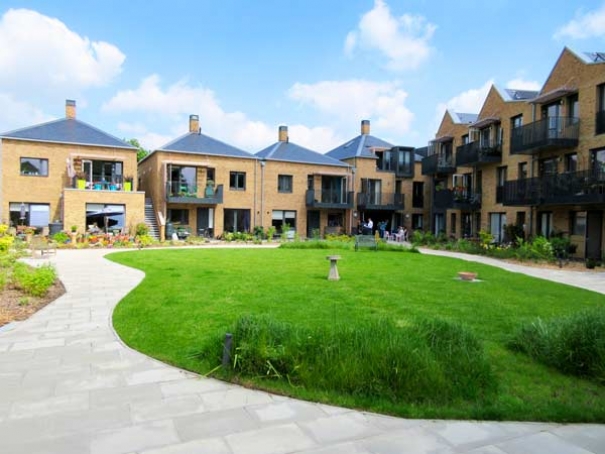 The co-housing flats designed for the needs of residents and to sensitively fit into Union Street courtyard Nick Jones
New Ground co-housing, the innovative flats for older women in Union Street, High Barnet, have been declared overall winner of the prestigious 2017 Housing Design Awards – and are now up for another accolade.

The Barnet Society is nominating the development for recognition in Barnet Council’s newly-launched 2017 Architecture Awards.

Nominations are being invited for projects completed within the borough between September 2014 and 15 September 2017, the closing date for nominations.

The citation for this year’s national Housing Design Awards says that New Ground – overall winner and winner of the custom-build award – was “an exemplar commune of spacious dual aspect-flats arranged around a sizeable garden, built within a conservation area, and serving a galvanised and empowered community.”

There was also a “human story” behind the awards because it was the “triumphant culmination of a heroic struggle” by a group of older women to create an independent housing development that conformed to their own personal needs and lifestyles.

New Ground is the UK’s first co-housing project for seniors, and the 25 flats broke new ground in the delivery of homes for older women by providing a mix of privately-owned and rented accommodation.

Shirley Meredeen, the last remaining founder member of Barnet’s Older Women’s Cohousing Community, told guests at the official opening in May, that completion of the project was a tribute to their perseverance in pursuing their dream to create a space for older women that balanced their needs for privacy with a sense of community.

...a radical experiment in communal living

In support of the nomination for the Barnet Council Architecture Awards, Robin Bishop, chair of the Barnet Society, said New Ground was “a radical experiment in communal living” that had been designed “sensitively” by architects Pollard Thomas Edwards to meet the needs of its residents and to fit into Union Street.

“New Ground co-housing would be a worthier winner than the flashy and domineering buildings that usually grab media attention. Make sure you vote for it,” said Mr Bishop.

Barnet Council will draw up a short list of properties nominated for an award and they will then be visited by a judging panel, with the winner being announced at an award ceremony in November.

More in this category: « Barnet teenage market a step closer Standing room only for church re-opening »