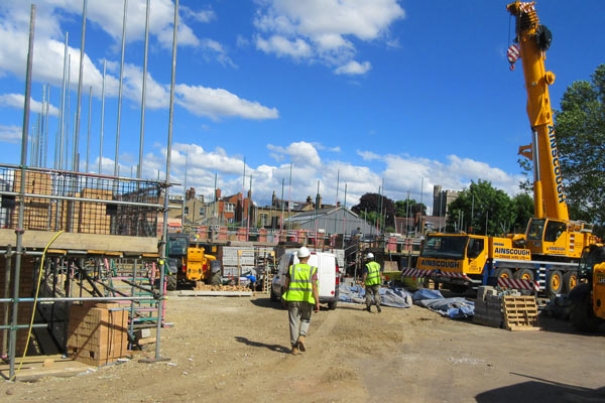 Work is well underway on 25 new flats for older women in Union Street
Two new housing developments are changing still further the appearance of Union Street in High Barnet, which in recent years has lost shops, offices, a school and even its public house.

Government encouragement for the conversion of commercial premises into new homes is transforming many town centres, and Union Street illustrates the rapid expansion in residential use. 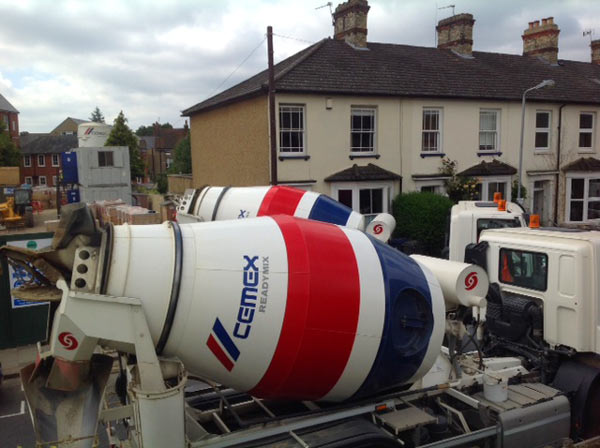 But the pace of redevelopment, and the disruption caused by building contractors, has alarmed local residents who are worried as to whether there will be sufficient space for numerous rubbish bins and extra car parking in what is already a narrow and crowded street.

Work is well under way on the two latest projects: 25 flats are being constructed on the site of former St Martha’s Convent School; and Barnet’s original town hall, built in 1889, is being converted into five flats.

Nicola Turner, whose house is opposite the entrance to the site of the 25 new flats that will become a co-housing scheme for older women, says she has been seriously inconvenienced by the arrival as early as 7 am of heavy plant and equipment being used by the contractors.

“Union Street is in a conservation area, and it is one-way, very small and not built for such heavy traffic. I have regularly had to object about lorries mounting the pavement to reverse into the site.”

Ms Turner says that her small house, built in 1815, has been severely impacted by the noise and reverberations from heavy lorries; a crack has appeared where there were none before. She has taken photographs of cement lorries and a mobile crane struggling to gain access.

When approached by the Barnet Society, the site manager for the main contractor, Quinn, insisted every effort had been made to work with local residents.

Union Street is in a conservation area, and it is one-way, very small and not built for such heavy traffic

This redevelopment will eventually be to their advantage. The new flats are very attractive, and will blend in well with the rest of the houses on either side of the road.”

Further along Union Street there have been similar complaints about the disruption caused by conversion of the old town hall into five flats.

The building, used previously by a firm of printers, has been enclosed completely in tarpaulins, and local residents are concerned about changes that might be made to the appearance of the original exterior. 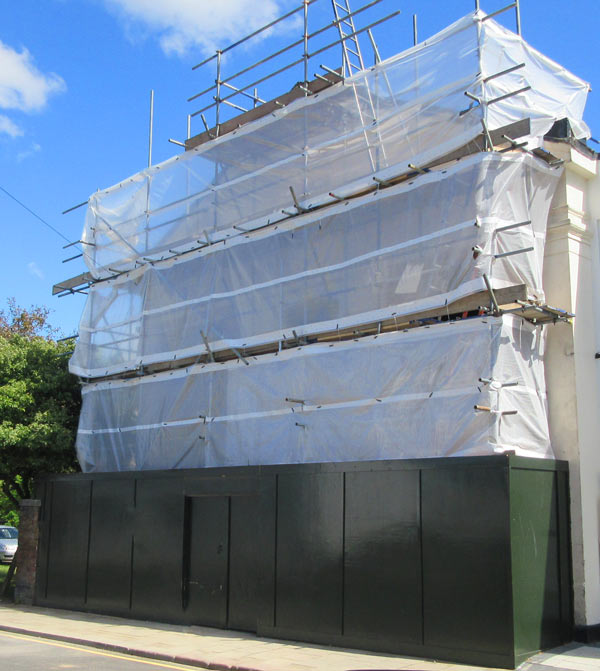 Final approval for the conversion was only given in the first week of July, after work had already commenced, and the occupants of nearby premises say there were still many unanswered questions about the project.

Simon Smith, clerk to the trustees of the Jesus Hospital Charity, which administers local almshouses, fears that no adequate provision has been made for either rubbish bins or car parking. His office is two doors away from the old town hall.

“Union Street’s character is being altered quite dramatically by these conversions, and while some buildings are being converted there are quite a few empty shops that seem to have been abandoned and have become quite an eyesore.”

A grocery and convenience store at the junction of Union Street and Stapylton Road was converted into a row of terrace houses some years ago, followed more recently by the closure of the Albion public house and its conversion into a terrace of three houses.

More in this category: « Green roof for countryside headquarters Death of historian who championed Barnet Museum »