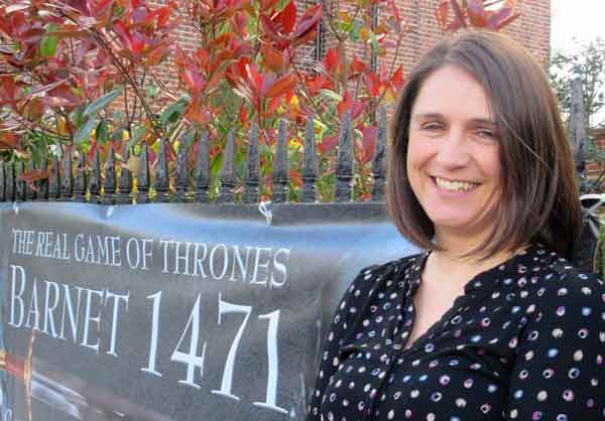 Helen Giles, project co-ordinator for the programme to develop and promote the Battle of Barnet
Helen Giles, who has wide experience as a museum curator and consultant for numerous heritage projects, has been appointed project co-ordinator for the programme to promote and explain the Battle of Barnet of 1471.

Her appointment by the Battle of Barnet Project has been made possible by a grant of £98,600 from the Heritage Lottery Fund.

HLF funding will enable the project team, with Ms Giles’ advice and assistance, to develop activities and resources to inspire the local community to find out more about the Battle and its role in the history of Barnet and in the Wars of the Roses.

Collaborating with history projects in local schools, opening a new gallery at Barnet Museum devoted to the Battle of Barnet, and the promotion of an annual medieval festival to celebrate the Battle’s anniversary, are among the project’s aims.

Ms Giles has over 17 years’ experience in the museum and heritage sector, and has worked extensively with volunteers in ensuring that heritage projects are delivered in accordance with Lottery Fund requirements.

Her latest assignments include project manager for the restoration of the Holkham Walled Garden at Wells-next-the-Sea, in Norfolk, and project curator for Wardown House Museum in Luton, two other projects that have been funded by the HLF.

A proportion of the Barnet HLF grant will fund Ms Giles’ two-year contract. She takes up her appointment in May.

Interest in the project to find out more about the Battle of Barnet – a programme backed by Barnet Museum, the Barnet Society and the Battlefields Trust -- has increased considerably since the start of an archaeological survey in the autumn of 2015 in fields and land to the north of Hadley Green, and the obelisk that commemorates the Battle.

Ms Giles said she could not wait to start work discovering more about the location and importance of Barnet’s battlefield. “I am sure that for many people Barnet’s role in the Wars of the Roses, and its connection to Richard III, is an untold story.

“My aim will be to do all I can to help the dedicated team at Barnet Museum build on their local heritage.

I hope my experience in delivering projects backed by the Heritage Lottery Fund will be of real value, especially in bringing the museum’s collections together, and in creating events to involve the local community and, also hopefully leave a lasting legacy.”

Mike Noronha, Barnet Museum curator, congratulated Ms Giles on her appointment and welcomed her to the museum.

“We are confident Helen’s experience will help take us to the next stage in developing and promoting interest in the Battle of Barnet.

“Don’t forget this was a battle that involved three kings (Edward IV, Henry VI and (the future) Richard III), two armies and one crown, so Barnet has plenty to shout about – and we are determined to make our contribution towards regenerating the town centre, and in putting Barnet on the map when it comes to the heritage trails of the Wars of the Roses.”

More in this category: « Wanted: Advice on protecting Barnet’s whalebones Petition to halt cuts in 384 »