Petition to halt cuts in 384 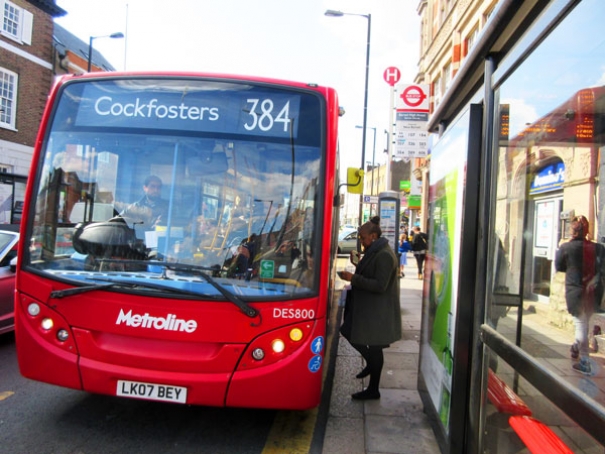 384 at bus stop on High Street
Transport for London is facing concerted opposition to a proposed reduction from 15 minutes to 20 minutes in the frequency of the 384 bus from Quinta Drive, Barnet, to Cockfosters.

According to TfL the service is underused, but local campaigners say the route is very popular, and they fear a reduction from four to three buses an hour is simply a cost-cutting measure to help finance the fares freeze.

A petition protesting at the proposed reduction to a 20-minute service from Monday to Saturday daytime -- and the removal of extra journeys at school times – is being presented to TfL.

Joshua Yates, who has been co-ordinating a campaign to stop cuts to the frequency of the 384, says that the bus route is a vital service connecting three stations, High Barnet, New Barnet and Cockfosters, and serves numerous schools along the route including QE Boys and QE Girls, the Jewish Community Secondary School, as well as East Barnet, Whitings, Foulds, Christ Church, Lyonsdown and Livingtone.

“At school times the bus can be standing room only.  Reducing the frequency, and removing the school journeys, will only encourage car usage on the school run.”

Mr Yates says the planned cut in the service runs completely contrary to TfL’s stated objective to improve orbital bus services in outer London because the 384 connects stations on two tube lines and the mainline, as well as connecting several high streets along the way.

Rather than cutting the service, he thinks TfL should be investigating whether there was some way the northbound 384 could turn into the approach road to the High Barnet tube station and then stop in the station forecourt, thus making it easier for elderly and disabled passengers who currently have to cross Barnet Hill to get to the bus stop.

“I do hope we can persuade TfL to recognise the need for this. If only one bus were to stop on the tube station forecourt, the 384 northbound would be the ideal choice because it is the only one that then serves the High Street, the Spires and then Barnet Hospital.”

A petition against the reduction in the 384 service is to be presented both to TfL and the Mayor of London. Councillor Philip Cohen is backing the protest and Andrew Dismore, the London Assembly member for Camden and Barnet has also raised the issue.

Mr Yates said the importance of the 384 was that it serviced roads that were some way from other bus routes.

“There has never been an indication previously that the route was under-used, and in fact extra school journeys were added in 2011 in order to cope with the extra demand with the opening of the Jewish Community Secondary School on the route.”

More in this category: « Battle of Barnet project co-ordinator Special protection for local landmarks »
back to top