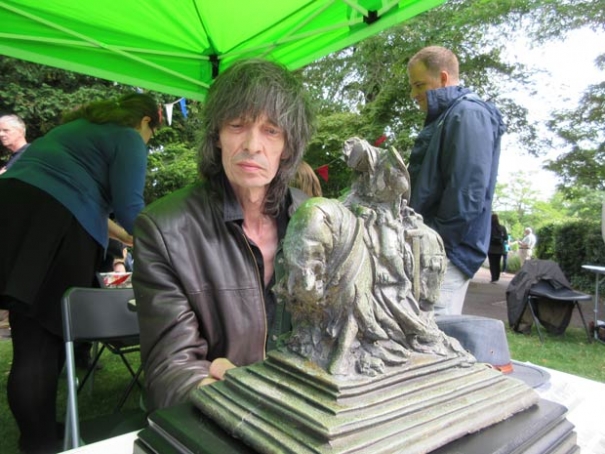 Barnet Sculptor John Somerville
A competition to find the best possible site for a three-metre high bronze sculpture to commemorate the Battle of Barnet is about to be launched as part of a crowdfunding appeal.

Barnet Borough Arts Council has started a campaign to raise £120,000 – the cost of casting and installing Pyrrhic Victory, a sculpture that has already been created in model form as a maquette by Barnet sculptor John Somerville.

Pyrrhic Victory depicts a man on horseback worn down by exhaustion leaving the battlefield, and it was inspired by the words of the Duke of Wellington – “Believe me nothing except a battle lost can be half so melancholy as a battle won”.

The Arts Council hopes the sculpture will become a lasting memorial to the futility of war and would commemorate not only Barnet’s role in the Wars of the Roses in 1471, but also local heroes in the two World Wars. 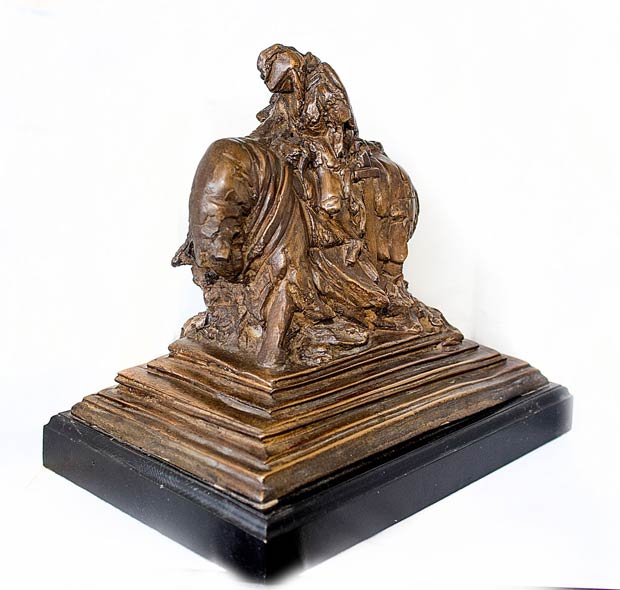 Mr Somerville produced his maquette of a figure on horseback some years ago, but due to a lack of funding it has never been cast. His most famous local work is a statue of Spike Milligan for Avenue House, Finchley, that took ten years to complete.

Casting Pyrrhic Victory in bronze – as a three-metre by three-metre sculpture – would cost around £85,000, plus another £20,000 for a plinth and installation.

Maria Jordan, who is co-ordinating the crowdfunding appeal on behalf of the Arts Council and Love Whetstone, told the Barnet Society that she hoped the campaign could generate interest through a competition to find the best possible site.

“There are lots of possible locations and we are hoping that once the crowdfunding appeal gets going, we can encourage local groups and residents to start lobbying for a suitable site.

“Ideally a sculpture needs to have space around it, so we think a location such as Church Passage, next to the parish church, or by the war memorial, would perhaps be too congested.”

She thinks that green spaces that could possibly accommodate a sculpture of that size include land in Totteridge Lane at the junction of the Dollis Valley walk; an unused green space opposite Waitrose in the High Road, Whetstone; the tree-lined, grass bank beside Barnet Hill; or a variety of locations in and around Hadley Green and the obelisk that is currently the only monument to the Battle of Barnet.

“We are sure lots of people will have different ideas, so a competition for the best site will undoubtedly create interest.”

Ms Jordan said she realised that trying to raise £120,000 was an ambitious target, but if the crowdfunding appeal and competition for a site attracted interest, then a bid could be made for support from the Heritage Lottery Fund and other historic and art groups that provide match funding.

The Arts Council says that although Mr Somerville is disabled, he continues to work and recent commissions include rock stars in bronze for Hard Rock cafes in New York, Houston and Los Angeles, Hawaii and Reykjavik, plus other public monuments and commemorative busts.

His Pyrrhic Victory maquette was exhibited at the Royal Academy, where he is a regular visitor.

A brief summary of Mr Somerville’s work can be viewed on YouTube under “John Somerville award” – a five- minute documentary made by the Stroke Association commemorating his creative arts award.