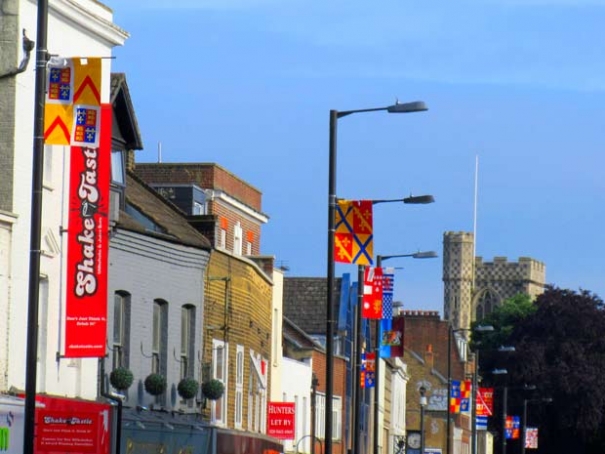 Heraldic banners from the Yorkist army flutter from lamp standards in High Street Barnet ahead of this weekend’s Barnet Medieval Festival
Barnet High Street is flying heraldic banners from the Wars of the Roses to promote the town’s first-ever medieval festival which is being held this weekend (Saturday and Sunday, 9 and 10 June) to commemorate the 1471 Battle of Barnet.

Barnet is the only registered battlefield within Greater London and the festival – featuring medieval displays and live re-enactments – follows an archaeological dig to find out more about the site of one of the grisliest encounters between the Lancastrians and Yorkists.

Edward IV, Henry VI and (the future) Richard III were at the Battle of Barnet, and so was the powerful Earl of Warwick, the Kingmaker.

Up to 150 re-enactors, in full armour, livery and costume, will be taking part in the festival.

Each day there will be re-enactments of both the Battle of St Albans (1461) and the Battle of Barnet (1471) and the re-enactors will fight mock battle scenes featuring the blank firing of canon and handguns.

Volunteers at Barnet Museum have hand painted over 30 heraldic banners, of which 13 from the Lancastrians have been hung from lamp standards on the west side of the High Street, and 13 from the Yorkists on the east side.

The festival, backed by the Heritage Lottery Fund, is being held at the Byng Road playing fields from 10am to 4.30pm each day. Admission is free.

Up to 60 medieval tents will be erected over the weekend, and the re-enactors, all members of the Medieval Siege Society and the Wars of the Roses Federation, will take part is staged combat, archery demonstrations and give living history displays of food preparation, cooking and other camp activities.

The official opening will be on the Saturday, at 11am, by the Deputy Lieutenant for the London Borough of Barnet, Martin Russell.

Programme highlights for both Saturday and Sunday

Note to news editors: King Edward IV (a re-enactor from the Medieval Siege Society) will be meeting pupils at Christ Church Primary School, Byng Road, Barnet, on Friday 8 June between 1.30pm and 2.30pm. The head teacher, Elena Print, is happy for the media to attend.