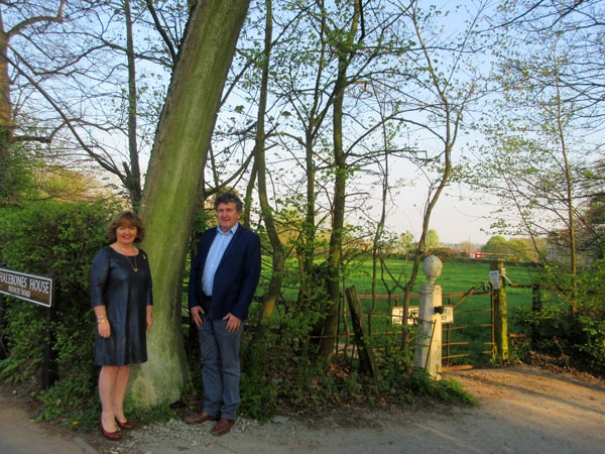 New owners of Whalebones House, Paddy Shanahan and Helena Boland, are seeking advice on how to protect an historic Barnet landmark.
Preserving two massive jaw bones from a ninety-foot-long blue whale is just one of the challenges facing the new owners of Barnet’s historic Whalebones House, one of the town’s oldest residences surrounded by woods and fields that are now threatened with redevelopment.

The two jawbones, twenty-four feet long and each weighing three-quarters of a ton, were installed at the Wood Street entrance to the house in 1939, and replaced an earlier pair of jawbones thought to be have been erected in the 1860s, or perhaps as early as the 1830s.

Although the two existing jaw bones appear sturdy and remain firmly in place, there are gaps and cracks in places and much of the surface is covered in moss.

Paddy Shanahan and his wife Helena Boland, who moved into Whalebones in January, are anxious to get advice on the best way to protect the bones now that they are nearly 80 years old, and have become rather weather beaten.

The jaw bones were from a blue whale captured in the South Seas in the late 1930s, and they were shipped to Hull from Bergen, in Norway, and then transported to Barnet by lorry.

Whalebones House and the adjoining farm, fields and woods, are part of the Wood Street conservation area.

When the designation was made in the 1960s Barnet Council’s planning department obtained advice on preservation methods from the Natural History Museum in London.

“As the new owners of Whalebones, we do feel we have a responsibility to do whatever we can to protect this historic pair of jaw bones, and we do hope we can track down experts who can advise on how they should best be cleaned and preserved,” said Mr Shanahan.

Together with his wife, Mr Shanahan has joined a Facebook page, Whalebones Farm Barnet – Save our Green Space, which is campaigning to block an attempt by the trustees who own the land and who intend to seek planning permission for housing in the fields woods that surround Whalebones House.

Under an agreement reached with a leading housebuilder, Hill, of Waltham Abbey, Essex, trustees for the late Gwyneth Cowing, who lived at Whalebones for many years, say they are exploring possibilities for building houses on the 11 acres of land they own.

They have said that they might be ready to seek planning permission by the end of the year.

The house, which has had several owners since Miss Cowing’s death, is hidden from view being surrounded by its own three acres of grounds which include two ponds and around 50 trees subject to tree protection orders.

So far 1,063 members have signed up to the Facebook campaign launched to preserve the entire 14-acre site as an irreplaceable green space between Wood Street and Barnet Hospital.

In their Facebook post, Mr Shanahan and Ms Boland, say they intend to maintain Whalebones House and its three acres of grounds as they were meant to be.

“We have a Sylvia Crowe designed garden which we are endeavouring to re-establish. There are upwards of 50 trees on our grounds with TPO protection. This is a real oasis where every form of wildlife exists.”

Identifying the various species on the land in and around Whalebones is one of the objectives of the Chipping Barnet MP, Theresa Villiers, who recently met local residents and is investigating whether there is support for an action committee to campaign against future redevelopment.

“Local people have said the Whalebones farm buildings, woods and land might be the home lots of important wildlife including bats and swifts, and possibly even newts, and we hope to get some expert advice.”

Mrs Villiers sent out questionnaires to nearby residents asking for their views on redeveloping Whalebones. “About 200 replied, well over 20 per cent, and all but one were against houses being built on the woods and fields. They all felt this green space was so precious that it should be preserved.”

There have been previous unsuccessful applications to build on part of the land: in 1979, a plan to build two houses was rejected on the grounds that the woods and fields around Whalebones presented a valuable open space between Victorian Barnet and the more modern developments on the borders with Arkley.

Records at Barnet Museum suggest the house was built in 1815 and the first reference to it being named Whalebones was on a map dated 1872.

Over the years countless Barnet youngsters have marvelled at the size of the jawbones from a blue whale, the largest species captured in South Seas.

When Miss Cowing, whose family formerly owned the Barnet Press, acquired the jawbones from Norway in 1939, it took half a dozen workmen, under the direction of building contractor, W Foster & Sons, all day to manoeuvre them into place.

In its account of the installation of the replacement jaw bones, a reporter for the Barnet Press suggested there was a connection between the original set of bones and a house on the opposite side of Wood Street which had a large flagpole in the garden.

However, Captain Fyson, the owner of the house, denied having brought the bones back to Barnet. He thought they might be connected to the famous polar explorer John Franklin (1786–1847) who had once lived in Whalebones and who, according to local legend, had installed the first set of whalebones sometime in the 1830s.

The following week’s edition of the paper offered an alternative version: Frederick Brown, who lived at 92 Wood Street, said his sister was married to Mr Easton, a Thames waterman, who had lived at the house and had started the tradition.

Mr Easton had joined the firm of Smith & Sons, whalebone and sealskin merchants, who plied their trade from the Thames, and he obtained a pair of whalebones which it was thought were erected in the 1860s and gave the house its name.

More in this category: « Playtime for “invisible” carers Battle of Barnet project co-ordinator »