Was Kitts End closest to the Battle of Barnet? 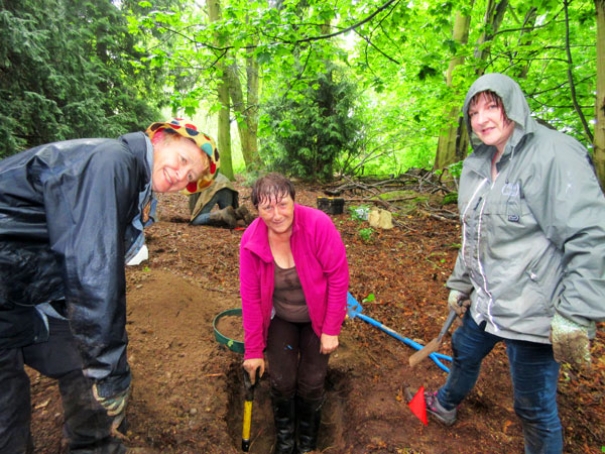 Undaunted by a downpour from left to right, Kirsty Johnstone, Susan Gough and Gabriella Widman
A survey to assess the size and shape of the lost hamlet of Kitts End could assist the ongoing archaeological investigation to determine the precise site of the Battle of Barnet of 1471.

When the Wrotham Park estate was expanded by the Byng family in the mid-1800s, much of the surrounding area – and possibly some of the battlefield itself -- was cleared of houses.

The parkland established around the Byng’s palladium mansion was extended to include the site of a cluster of hostelries, inns and houses that had been built at Kitts End, alongside the original road to St Albans, mid-way between Barnet and South Mymms.

Maps from the 1750s show there were a dozen or more properties in the hamlet, now the setting for Wrotham Park’s pinetum – an ornamental plantation of pines and conifers, including cedars, Scots pines and sequoias, all said to be at least 150 years old.

Sam Wilson, the archaeologist leading the Battle of Barnet Project, together with a team of volunteers, spent three days digging a series of test pits across the pinetum to try establish the extent of the hamlet, and then to determine whether it existed in 1471.

“What we are keen to establish is whether the hamlet was there in the late medieval period when the Battle of Barnet took place, because it might have been the closest habitation,” said Mr Wilson.

“If, by what we find in our test pits, we can tell anything about the size of the hamlet, we can then build it into our survey work to understand the landscape at the time of the battle.

“Any clues showing that the hamlet was there in the late medieval period might well be significant in placing the battlefield.”

A considerable quantity of durable masonry was recovered from the test pits, including ceramic building material and clay pipes.

“Our most interesting finds were several pieces of pottery, including the handle from a jug or mug, that might well have been from the medieval period. They are all being cleaned and will then be dated.”

Mr Wilson said that understanding the landscape of the battlefield was an integral part of their survey and excavation. “This is the most comprehensive study of the Barnet battlefield and determining the extent of medieval habitation will be part of the lasting legacy of our project.”

For the volunteers assisting Mr Wilson, the chance to help with the Battle of Barnet project by digging test pits and searching for early building material was a chance not to be missed.

Despite having chosen a wet day, an all-women team tackled the dig with gusto. Susan Gough, almost up to her waist in one pit, admitted she was “quite useful” with a spade.

“We have been taking it in turns to dig and then sift the earth, and it’s great feeling to think I am part of this investigation. I have always wanted to go on an archaeological excavation.”

Kirsty Johnstone, a member of the Barnet Society, said it was so important to local people to get behind the Battle of Barnet project.

“If this archaeological project was taking place anywhere else but the London Borough of Barnet, it would be massive. But when we have a local council that won’t even offer any help whatsoever to Barnet Museum, we know that it’s up to us to show that the people Barnet do actually care about their history and heritage.”

Gabriella Widman, the third member of the digging party, was equally determined to play her part. “I am a member of the Richard III society, so the Battle of Barnet was his first battle, as the Duke of Gloucester, when he was just 18, and needless to say I am getting a real buzz being involved in this dig.”