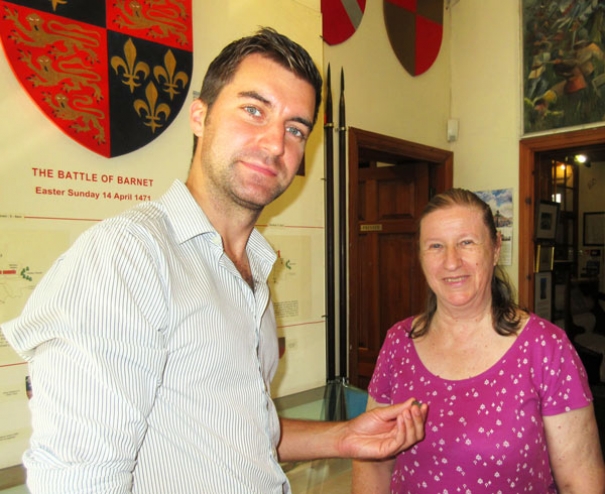 Sam Wilson, military archaeologist, shows Dorothy Cohen, the medieval penny that was found with metal detectors in the latest search of a likely site of the Battle of Barnet
After an extensive search with metal detectors a highly-experienced team of military archaeologists has unearthed a host of medieval items that might be linked to the 1471 Battle of Barnet.

Sam Wilson, of Huddersfield University, who is leading the project to find the exact site of the Barnet battlefield, hopes that some of the objects might help determine precisely what happened in one of the fiercest confrontations during the Wars of the Roses.

The latest finds include medieval horses’ mounts, strap ends and badges. Over the next few months all the items will be cleaned and dated, and their significance assessed as part of the Battle of Barnet Project.

Mr Wilson was joined for the search by military archaeologists who have worked on battlefield surveys and excavation at two other Wars of the Roses sites, the Battle of Towton, Yorkshire (1461) and Battle of Bosworth Field, Leicestershire (1485), and also archaeologists from Poland who have surveyed the site of the Battle of Grunwald (1410), a decisive confrontation in the Teutonic War.

A week was spent examining with metal detectors a number of fields between Wrotham Park and the St Albans Road, and Mr Wilson said their survey was the most productive since they began work at Barnet last year.

“We had assembled one of the most experienced teams with knowledge of examining 15th century battlefields, and every day for over a week there were at last nine of us at work criss-crossing the fields with metal detectors.

“We ended the week with by far the greatest concentration of medieval finds since we began our surveys last year, and once we have dates back for the various items we should be able to say whether they do relate to the Battle of Barnet.”

In addition to the mounts, straps and badges, one of the most promising finds was a medieval copper penny, and if it was from the reign of Henry VI or Edward IV it would indicate it was from the period immediately preceding the battle.

The excavations did not produce any cannon balls, but a large quantity of small lead shot used in hand guns was recovered, together with larger rifle lead balls, and other artefacts that indicated possible hand-to-hand combat.

“We have had a really productive end to the first phase of the Barnet project. We have found a high concentration of medieval items of the right period and once the material has been dated we can begin to work out how the finds relate to the battlefield itself and landscape of the battle site.”

Mr Wilson said the project would continue next year with more searches with metal detectors, and possible further excavations to find the site of the chapel erected after the battle, and to discover more about the lost hamlet of Kitts End, thought to have been the closest habitation to the battlefield.

More in this category: « Was Kitts End closest to the Battle of Barnet? The bustle of Barnet 120 years ago »