Search for Battle of Barnet chapel 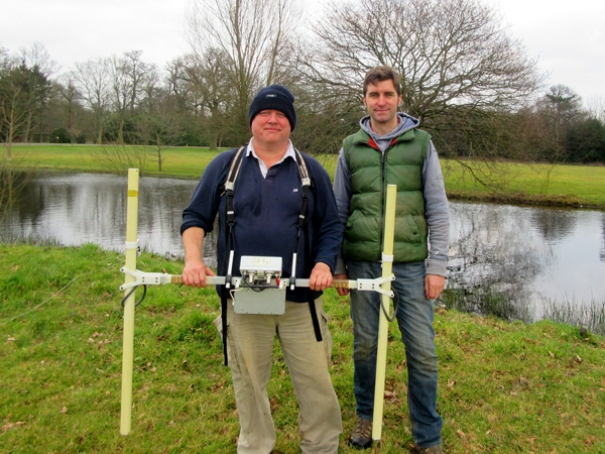 Dominic Barker, of the University of Southampton, at work with his magnetometer in Wrotham Park. Sam Wilson (right) is the archaeologist leading the Battle of Barnet survey and excavation.
A series of test pits are to be dug on land inside Wrotham Park as part of an investigation to locate the possible site a chapel that was erected to commemorate men killed in the Battle of Barnet of 1471.

Sam Wilson, the archaeologist leading the Battle of Barnet project, gave the Chipping Barnet MP Theresa Villiers a tour of the area thought most likely to contain what his team hopes will produce some interesting finds.

A geophysical survey conducted by a specialist technician from the University of Southampton confirmed that the target area was well worth further examination.

“We are investigating the belief that a chapel was built after the battle on what had earlier been a moated hermitage inside what is now Wrotham Park, and we are trying to see if we can locate the remains of any foundations.

“A geophysical survey has never been done before to test theories about the existence of a chapel. It is far too early to be sure of anything, but the next step is to dig test pits, to test a number of geophysical anomalies, and see what we find,” said Mr Wilson.

Mrs Villiers said the progress so far in trying to discover the site of the chapel was “very encouraging” as it might well prove to be another step in determining where the battle took place.

Dominic Barker, the technician from the archaeology department at Southampton University, who spent a week conducting magnetometery and resistivity surveys, concentrated his search in the fields around what is believed to be the last remaining section of the moat that encircled the original hermitage. 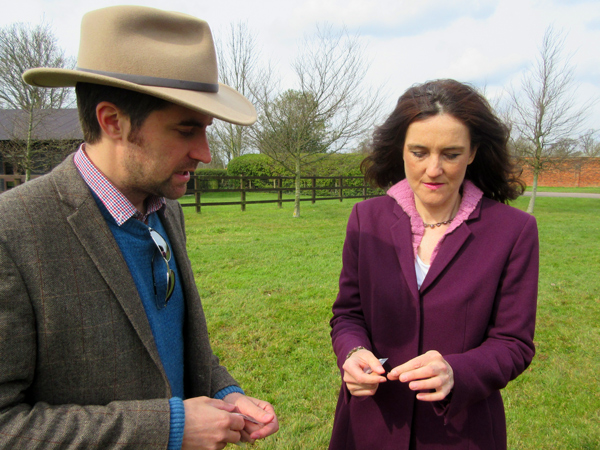 If the theory put forward by local historian Brian Warren is correct, the chapel was built on the site of the hermitage and was intended to commemorate those killed in the battle, whose bodies might have been buried nearby in a mass grave.

Mr Barker said the importance of a geophysical survey was that it could detect buried structures and cut features to a depth of up to half a metre and once downloaded, the resulting data shows up any magnetic variations in the ground, indicating where perhaps there had once been a ditch or stone foundations.

“The level of magnetic resistance tells us a lot about what is under the top soil, and the magnetic variations in the ground indicate not only possible foundations, but also for example the presence of a moat that might subsequently have been back filled.”

Mr Wilson says the search for the site of the chapel is going hand in hand with extensive surveys with metal detectors on farmland in and around Wrotham Park.

Finds have included lead shot, coins and other artefacts, and although nothing has been found that can definitely be linked to the battle, the team are narrowing down their search area.

“Obviously we are looking at several possible sites for the battle, but having spent the last five months searching the area, I have to say I do remain optimistic that we might well be able to come up with a pretty firm idea of where it might have taken place.”

During her visit Mrs Villiers was shown coins and other objects dating from the second half of the 15th century that might well be connected to the battle. These artefacts were unearthed in previous years and are currently on display at Barnet Museum.

They include a coin dated 1468 from the reign of King Edward IV; a French jetton or counting piece that might have belonged to one of the French gunners who fought at Barnet; and a late 15th century copper bar to which a purse would have been attached.

Mr Wilson said that although the items had all been found within Wrotham Park there was no proof they were owned by those who fought at the battle.

“The coins and artefacts might just as easily have been dropped by travellers on the Great North Road, so we can’t be sure, but along with two cannon balls previously found on the Wrotham estate, they do seem to indicate we are searching the right area.”

More in this category: « A peep inside physic well Was Kitts End closest to the Battle of Barnet? »