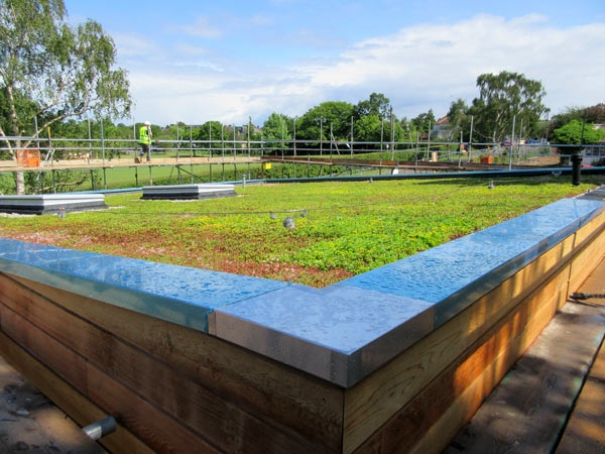 Barnet's new countryside headquarters green roof
A living roof planted with sedum is one of the eco-friendly features of the new Barnet Environment Centre, which is nearing completion at the end of Byng Road.

Friends and supporters are hoping to fit out their new building during August ready for an official opening in mid-September at the start of the new academic year, when the centre and its nature reserve will re-open for school visits.

Construction of the new centre began at the start of the year, and the aim was to make it as environmentally friendly as possible. Its roof of sedum rock plants is easily the largest living roof of its kind in Barnet and will help reduce global warming by absorbing carbon dioxide.

Planting a green roof of rock plants was quite an experience for the team employed by Maurice Williams Construction. “We laid the sedum and watered it for the first three weeks,” said site manager Lloyd Holliday.

“Almost straight away we started to see pink and yellow flowers, and then before we knew it the roof was attracting bumble bees and lots of other insects.

It’s been a real privilege to work on such an environmentally friendly project.

The centre has been constructed largely in wood, with cedar cladding at the upper level. Inside there is underfloor heating. Mains services such as water, gas, electricity and telecoms have now been connected.

Dick Elms, chair of the trustees, said anyone walking down Byng Road towards the rugby club and allotments would see that the new building is very attractive in appearance, especially with its green roof of sedum.

“Friends and supporters are planning to transfer materials and equipment into the centre during August, with a grand opening in mid-September, so we will be up and running for the autumn term.”

Mr Elms said the environment centre had been awarded a £10,000-a-year grant by the John Lyon’s Charity to help finance its schools programme.

The grant will contribute to the cost of the centre’s environmental education manager Caroline Gellor who organises and runs the school visits.

In 2014 the centre received over 50 school visits and Mr Elms said the aim was to increase that during the coming academic year.

“When we were visited by the John Lyon’s Charity, they were very impressed by all the work we have been doing in our classroom and around the nature reserve.

Securing the annual grant means we can continue to plan for extending our environmental education work, knowing that the basic costs will be covered.”

The construction of the new environment centre is the first phase in redeveloping the site of the former school premises, just off Byng Road.

One of the disused buildings has now been demolished to provide access to the new centre, and the remaining buildings will be demolished during the second phase of the project, which will include construction of the new Noah’s Ark Hospice, due to start sometime in 2016.

The site of the former school, together with the nature reserve, is under the joint control of Noah’s Ark and the London Wildlife Trust, and their precise relationship with the Barnet Environment Centre is to be finalised later this year.