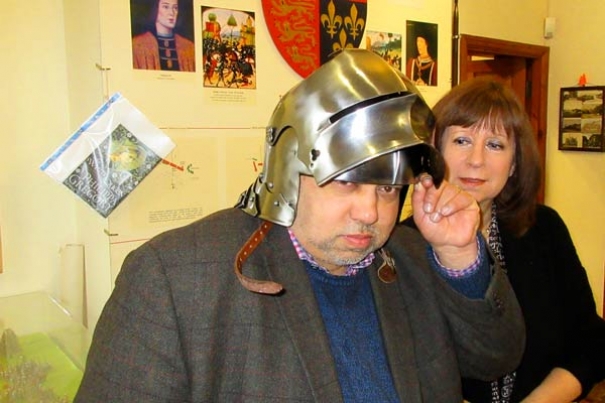 Hilary Harrison, a member of the Battle of Barnet project team, looks on as trustee Michael Noronha tries out a medieval helmet newly acquired by Barnet Museum.
A replica of a late medieval helmet of a kind worn by a knight or man-at-arms at the 1471 Battle of Barnet is the latest acquisition for an exhibition that is being planned at Barnet Museum to celebrate Barnet’s role in the Wars of the Roses.

A second helmet will be included in a loans box of replicas, costumes and artefacts that is to be supplied to local schools as part of the Battle of Barnet project which has the support of the Heritage Lottery Fund.

One of the long-term commitments of the project is to widen understanding and interest in one of the grisliest conflicts of the period.

Barnet Rugby Club’s ground in Byng Road has been booked for the weekend of June 9/10 and preparations are underway for a series of re-enactments and displays.

To help publicise the event, ten or so heraldic banners are to be hung along the length of Barnet High Street to create a festival that the project team hope will prove as popular as the famous Tewkesbury festival commemorating the Battle of Tewkesbury that took place in May 1471, three weeks after the Battle of Barnet.

Other events planned for the coming months include a talk and presentation by the renowned medieval artist Graham Turner on Saturday 10 April and a talk on Richard III by the historian and author Alison Weir on Saturday 22 September.

The replica helmet was obtained from the Royal Armouries museum at Leeds, and the original is in the Berlin history museum.

“A helmet like this – known as a sallet – would have been worn at the Battle of Barnet by a wealthy knight or man-at-arms.

It would have been made in Germany, at Nuremberg or Augsburg, which were two centres for the manufacture of medieval armour” said Howard Simmons, who represents the Battlefields Trust on the Battle of Barnet project.

A helmet like this – known as a sallet would have been made in Germany, at Nuremberg or Augsburg

“A sallet is designed to protect the head and back of the neck. A sword or arrow would bounce off the helmet, protecting the wearer.  Once a battle was over and the dead were being collected, soldiers would have tried to salvage any helmets or armour they could find so that they could better protect themselves.”

The museum hopes to raise sufficient funds to display a replica of a knight in armour – and also perhaps commission a painting from the Graham Turner – to form a centrepiece of an exhibition depicting the Battle of Barnet.

After survey work during the last two years which has included extensive searches by metal detectorists and the digging of test pits, the celebrated battlefield archaeologist Dr Glenn Foard of the University of Huddersfield has concluded that the most likely site of the battle was in the fields off Kitts End Lane.

Metal detecting in this area turned up the greatest concentration of potentially medieval finds, including harness mounts, strap ends, badges and spurs, and are consistent with the types of finds from other Wars of the Roses battlefields such as Bosworth and Towton.

So far, no artillery rounds have been found but other battle-related finds handed in to the museum over the years do include three large lead artillery projectiles which “show marks of having been fired, and were undoubtedly used in the battle.”

Dr Foard, who located the site of the Battle of Bosworth where Richard III was killed, is exploring options for more archaeological investigations this year, including further examination of the site of a chapel in Wrotham Park which is thought to have commemorated those killed in the battle.

The Barnet battlefield survey was made possible with a grant from the Hadley Trust.

More in this category: « Hidden secret in Wood Street Whalebones. Is this the future? »
back to top