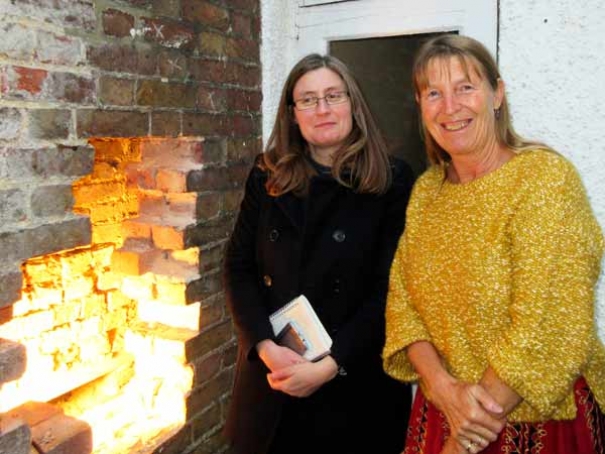 Removing bricks in a cottage wall exposed the hidden wallpaper. Emma Hardy (left) with Penny Mayes.
Two historic cottages at the corner of Wood Street and Manor Road have revealed a secret that has been hidden for 150 years or more – and it gives a glimpse of the fashionable interior of the fine houses that once graced High Barnet.

Behind a second brick wall between the cottages and an adjoining property there was another wall papered in a deep-purple flocked wall paper of a type that might once have decorated a gentleman’s smoking room or sports hall.

The paper is in such fine condition that a section has been taken for further examination by experts at the Geffrye Museum in Shoreditch, which explores the way homes have been furnished over the past 400 years.

Emma Hardy, the museum’s collections manager, was given a length of the wallpaper by Penny Mayes, who has lived in Wood Street since the family purchased the first of their two cottages in 1989.

Ms Hardy said the wallpaper would now be examined by specialists at the Geffrye who would be able to consult the wallpaper books and samples of firms such as Cowtan and Sons who were established as wallpaper suppliers in 1830.

“Given its age, it is in remarkably good condition and the purple background for the black flock has not faded, so we should have a good chance of dating the wallpaper and in determining the kind of room it might have decorated.”

Penny Mayes said the hidden wall and its wallpaper was discovered in the spring of 2017 when they had to tackle a damp problem. 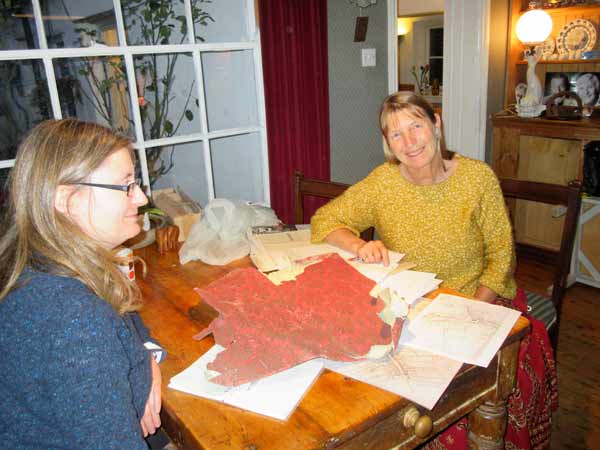 When they took away some of the bricks they found a cavity behind the outer wall where it abuts the next-door property, which is now the Cosmo House offices, but was previously a large house.

“We think what happened was that around 1840 a single-story extension was built next-door and its inner wall was the outer wall to our cottage, but by 1881 this building had been replaced with a two-storey extension and this is when we think the second wall was built, leaving a cavity that preserved the original wallpaper.

“Judging by the quality of the wallpaper, and the deep purple and black flock, it looks really luxurious, and we wonder whether the single-storey building might have been a gentleman’s smoking room or sports room.

The two cottages, known as Claire Cottages, are not without interest as their footprint was there long before the Barnet Enclosure Award of 1818. Prior to 1830 they were owned by Thomas Booth, and although they had been occupied by several tenants when his widow Sarah Booth died in 1864 there was a public proclamation to see if anyone else had a claim to them.

In 1917 the two cottages were purchased for £575 by Ethel and Mabel Janes. Ethel, the wife of Arthur Horace Lines, was the licensed victualler at the Duke of York on the Potters Bar Road.

Ethel and Mabel sold one of the cottages to John Francis Cheek for £375 in 1923. The Cheek family were local chimney sweeps and the barn below the cottages was where the family kept their horse and cart.

“When we moved in we were fascinated by a local story that John Horace Cheek had hidden his fortune somewhere inside the cottage...we looked everywhere when we converted the two cottages into one property, but sadly never found the money,” said Penny.

Published in General News
More in this category: « Preserving footpaths – you can help The Sallet »