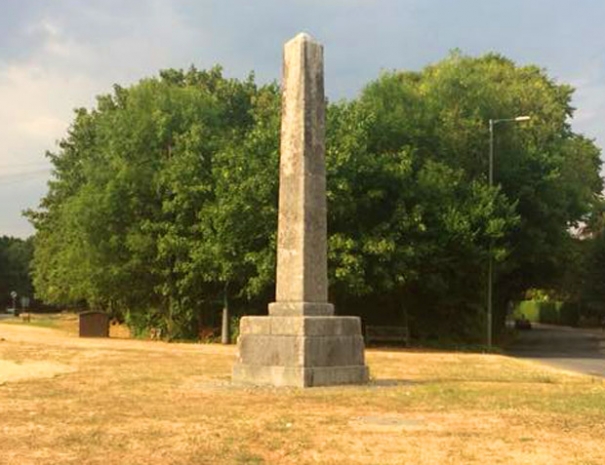 Medieval historians say the obelisk is in a poor state of repair and the stone work is in dire need of repointing and cleaning.

As a first step, members of the Barnet 1471 Battlefields Society are trying to determine the ownership of the obelisk.

“So far we have been unable to work out who owns it and who might be responsible for its upkeep, as English Heritage, Barnet Council and Barnet Museum all have very limited information,” said the society’s secretary Liz Bown.

The obelisk was erected in 1740 by Sir Jeremy Sambroke and stands at the junction of the Great North Road and Kitts End Road.

It carries the badly-weathered inscription: “Here was fought the Famous Battle Between Edward the 4th and the Earl of Warwick April 14th Anno 1471 in which the Earl was Defeated And Slain.”

The Barnet 1471 Battlefields Society was established two years ago, and is a member of the Battle of Barnet Project, together with Barnet Museum.

It is making plans to mark the anniversary of the battle with a wreath laying at the obelisk on 14 April 2019 to commemorate all the Yorkists and Lancastrians that fell in the battle at the height of the Wars of the Roses.

Preceding the wreath laying, the society is staging a medieval banquet at Church House, Wood Street on the evening of 13 April 2019.

The feast, comprising a mixture of hot and cold sweet and savoury dishes, is to be prepared by Stuart Peachy, a renowned food historian, and there will be entertainment throughout the evening by the Trouvere Medieval Minstrels.

In support of the archaeological excavations and surveys that are already underway to determine the site of the battlefield – thought to be in the fields to the west of Kitts End Road – the society is launching a new research programme.

Volunteer researchers are being urged to help study the original manor house court roles for the Barnet and Hertfordshire area, from 1470 to 1476, and agricultural maps showing medieval ridge and fallow markings to see if this helps in mapping the 1471 historical landscape.

“If we review all the documents we might get some clues to assist the project to find the battlefield site, and if we understand as well the local politics of the time, we might be able to build a picture of the military tactics used by the Yorkist and Lancastrian armies.”

The society’s starting point for the project will be the Appraisal of the Battle of Barnet 1471 by local historian Brian Warren who has spent much of his life time researching Barnet, Potters Bar and Hertfordshire for the Potters Bar and District Historical Society.

Ms Bown says Mr Warren’s research does suggest there might be another memorial to the Battle of Barnet, in addition to the Hadley Highstone obelisk.

“There is a belief that beside a footpath off Mimms Lane there is what is known as Warwick’s stone, marking the spot where the Earl of Warwick, the Kingmaker, fell and died at the Battle of Barnet.

“If we could discover the location of that stone it would be a real find.”

The society is appealing for volunteers to join its research programme and is also recruiting a committee to run events.

Another of the society’s projects, backed by a grant of £1,500 from Barnet Council, is to prepare school curriculum packs on the Wars of the Roses and the Battle of Barnet and activity packs for youth groups.

More in this category: « Site needed for Battle of Barnet sculpture Founder remembered at arts exhibition »